Even more incredibly, her mother Chris-Lyn gave birth naturally; no C-section. The labour lasted only about two hours from start to finish.

Baby Oaklyn is her fourth child. Her three older brothers all tipped the scales at a higher-than-average weight when they were born: they were nine pounds, 10.7 and 11.2 pounds, respectively. Still, Oaklyn’s parents Chris-Lyn and Matthew were in disbelief when they saw the scale.

The average baby weighs about seven and a half pounds. Oaklyn’s grandmother is trying to convince her parents to add another middle name: Grace, which would make her initials O.M.G. 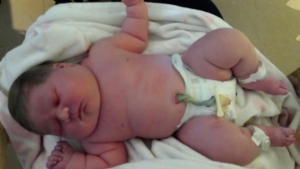