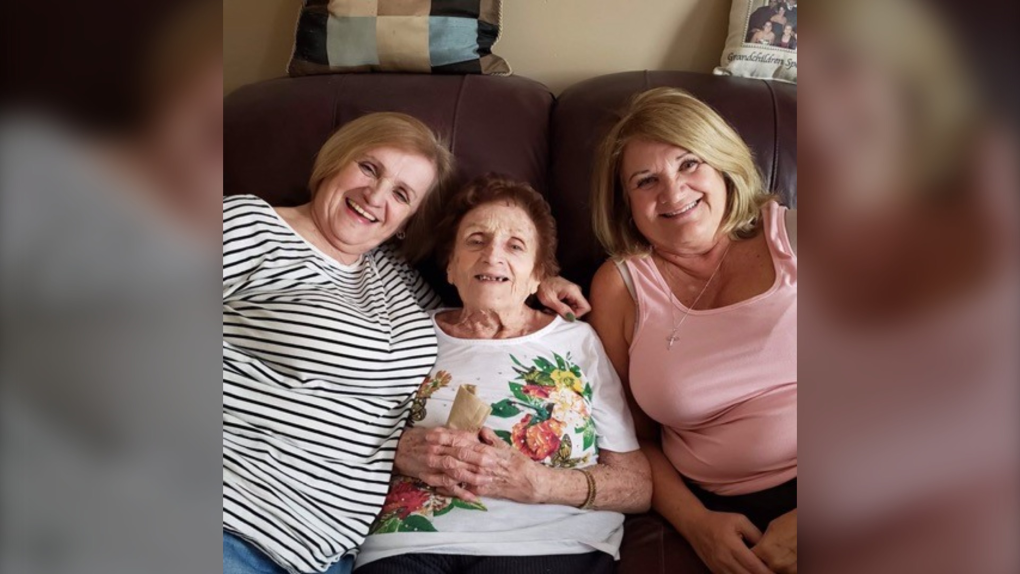 Patricia Hughes, centre, tested for positive for COVID-19 while at the Ottawa Hospital just days before receiving her vaccination. (Photo courtesy: Julia Scott)

She celebrated her birthday at the Ottawa Hospital Civic Campus; where she’s been a patient since November 17, after being deemed a fall risk.

For months, her daughter Julia Scott says the family has been trying to get her vaccinated.

"It was when we got a vaccine and they started doing nursing homes, that’s when we started 'well when can she get vaccinated,'" Scott said.

Scott says hospital staff told her because Hughes wasn’t a resident of a senior’s congregate care home, like a long-term care home or retirement home, she didn’t qualify under the province’s Phase 1 of the COVID-19 vaccination rollout.

That all changed on Saturday. Scott says she contacted The Ottawa Hospital CEO Cameron Love, and within minutes her mother had her first vaccine.

She says Love told her provincial guidance was updated last week to allow patients over 70 to receive their vaccine.

"Unfortunately, it’s a little bit too late. Mom has COVID," she continued.

Scott says her mother tested positive on Thursday, just days before she was able to get her vaccine.

Now she’s wondering why those younger than her mother were first to get their shot.

Scott’s frustration comes as a viral tweet claiming people as young as 16 years old could be placed on a stand-by list to be vaccinated with leftover doses at east end clinics in Toronto.

A statement from Ontario's Ministry of Health says the stand-by list is done in full alignment with provincial priorities and that clinics "must make every effort to give it to someone aged 70 or older" or to "another priority population like a frontline healthcare worker."

In Ottawa, Mayor Jim Watson says extra doses are given to frontline healthcare workers who qualify under Phase 1 of the provincial rollout.

The province says the vaccination rollout to this point has been based on age and risk, with expanded appointments starting in Toronto before other public health units, but that’s expected to change as Ontario enters Phase 2.

"As phase two kicks into gear, Ottawa has been identified as a hotspot so once that phase moves into action we’re going to be receiving an over-capacity supply, over per-capital supply for the city of Ottawa," Nepean MPP Lisa MacLeod said.

"You want to target people at highest risk, so that’s one of the considerations. Geography is actually a really good way of targeting people at high risk," Manuel said.

Manuel says the risk of infection can increase as much as tenfold depending on age or location.

He says vaccinating in hospitals is complicated

"Vaccinating people in hospital is a little trickier to implement as well because do you have one dose or two doses and you don’t have that immunity for a few weeks, so I think there’s been a bit of a delay in focusing on those folks," Manuel said.

While Scott is thankful her mother has her vaccine, she’s still worried about how Hughes will handle her bout with COVID-19.

"We’re praying that she can stay asymptomatic because that would be, at this point, our best case scenario," Scott said.

A spokesperson for The Ottawa Hospital said they’ll begin vaccinating inpatients over the age of 70 on Tuesday.