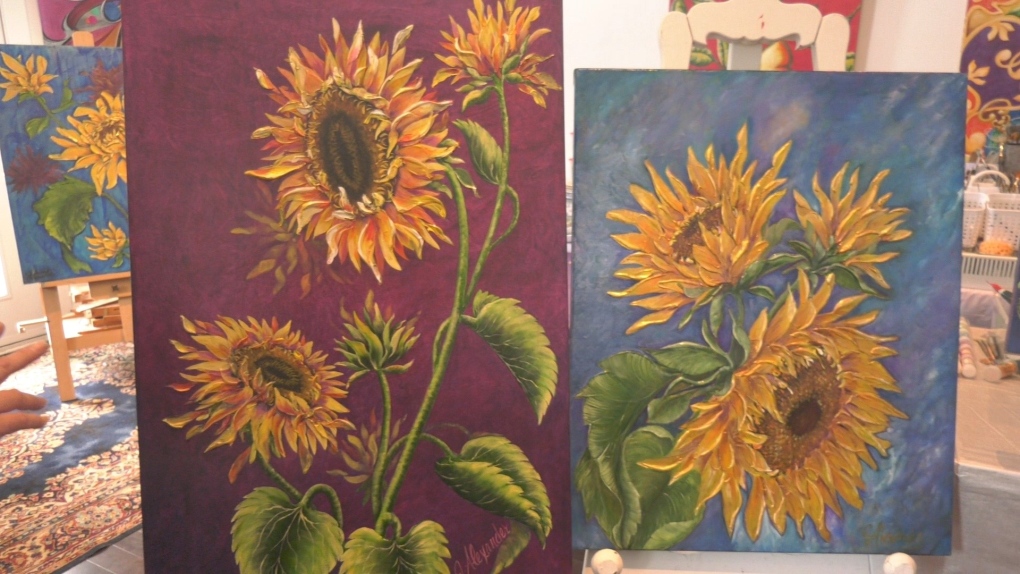 Two of Jill Alexander's sunflower paintings. Proceeds from the sale of these paintings will be donated to the Red Cross in support of Ukraine. (Dylan Dyson/CTV News Ottawa)

The sunflower, the national flower of Ukraine, has become a symbol of peace and solidarity for the war-torn country since Russia invaded at the end of February.

Earlier this month, while working in her studio, Alexander was watching events in Ukraine unfold when one update struck a nerve.

"The bombing of the maternity hospital," Alexander recalls, talking with CTV News. "My third grandchild was due any day, so that was a really emotional thing for me."

Alexander welcomed her third grandchild happy and healthy this past Saturday, but it was at that time that the valley artist took a sign from the universe.

"As they're talking about the hospital bombing, I'm looking at the TV and right beside it is the big sunflower painting and it just seemed totally obvious."

Alexander has now completed eight unique sunflower paintings, most in the colours of Ukraine, and put them up for auction on her Facebook page. She says 100% of the bid proceeds will go to the Red Cross Ukraine humanitarian crisis fund. Bidding for all eight paintings ends March 16.

"I feel like my effort plays a small part in a bigger effort," says Alexander.

The 62-year-old painter says despite being safe at home thousands of kilometres away, her work brings her pride that she is doing whatever she can to help those affected.

"If we can all do something, it's going to benefit. So, this isn't just me. It's me and my two [helpers] and all these people that are bidding who are making a difference."

Russia strikes Kyiv as troops consolidate gains in the east

As Senate-confirmed justices end Roe, how will voters react?

Republicans are heading into a November midterm election that is poised to swiftly become a referendum on the court's decision to overturn Roe v. Wade, as voters decide which party should control Congress