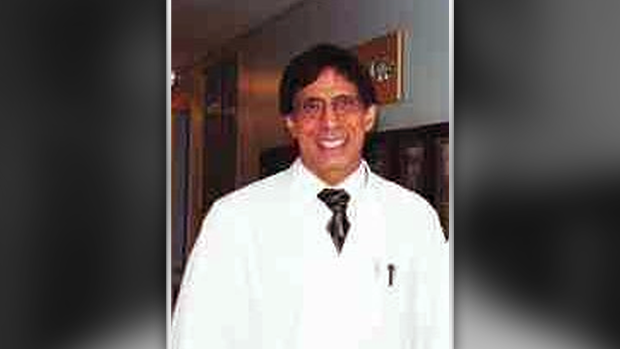 A well-known thoracic surgeon in Ottawa has been suspended from his teaching position after allegedly making a joke about domestic violence.

Sources tell CTV that the incident is even more shocking because the surgeon’s son is facing a first degree murder charge, accused of beating his wife to death.

Sources tell us that Dr. Farid Shamji made these comments at a retirement party a couple of nights ago.

And that it caused an instant buzz in the room given Shamji's son stands accused of killing his wife.

It was a horrific crime two years ago that shattered a family and the medical community.

Dr Elena Fric Shamji, a family physician and mother of 3, was found strangled and beaten to death. Her body stuffed inside a suitcase and dumped along a road in Toronto.

The next day her husband, neurosurgeon Dr Mohammed Shamji, was arrested and charged with first degree murder and committing an indignity to a body. He will stand trial next April.

Shamji's father is also a physician, a thoracic surgeon at the Ottawa Hospital.  He's now under investigation and his teaching privileges at the University of Ottawa Faculty of Medicine have been suspended

At the heart of this issue is a comment that Dr. Farid Shajmi is alleged to have made at a recent retirement party where he was one of the speakers honoring the retiree.  Sources tell CTV News that the comments centered around domestic violence and specifically the beating death of a wife.  The person who spoke to us on the condition of anonymity said the comment prompted an uncomfortable reaction in the room and people turned to each other upon hearing the comment and said, “Did I just hear what I think I heard?”

The University of Ottawa said it's aware of the alleged incident.

"Pending the completion of the investigation, the Faculty of Medicine has temporarily suspended Dr. Farid Shamji from his academic appointment. He will therefore no longer have direct contact with students and staff."

The Ottawa Hospital confirmed it is conducting its own investigation into the matter:

"While we cannot publicly comment on individual cases, our values do not condone sexist or any other behaviours or actions that make staff, physicians, patients or visitors feel less safe. "

Amina Doreh is with the Sexual Assault Support Centre in Ottawa, “It is unprofessional and callous and disappointing that violence against women is constantly the butt of the joke especially in this context.”

Doreh says it is encouraging, though, that people are no longer passively accepting these kinds of comments.

We tried reaching out to Dr. Shamji for his comments but have not been able to connect with him. There is now a process that has begun in terms of this investigation.  We know this has gone to the Department Head of Surgery.  In the meantime, Dr. Shamji's involvement at the university level has been put on hold.