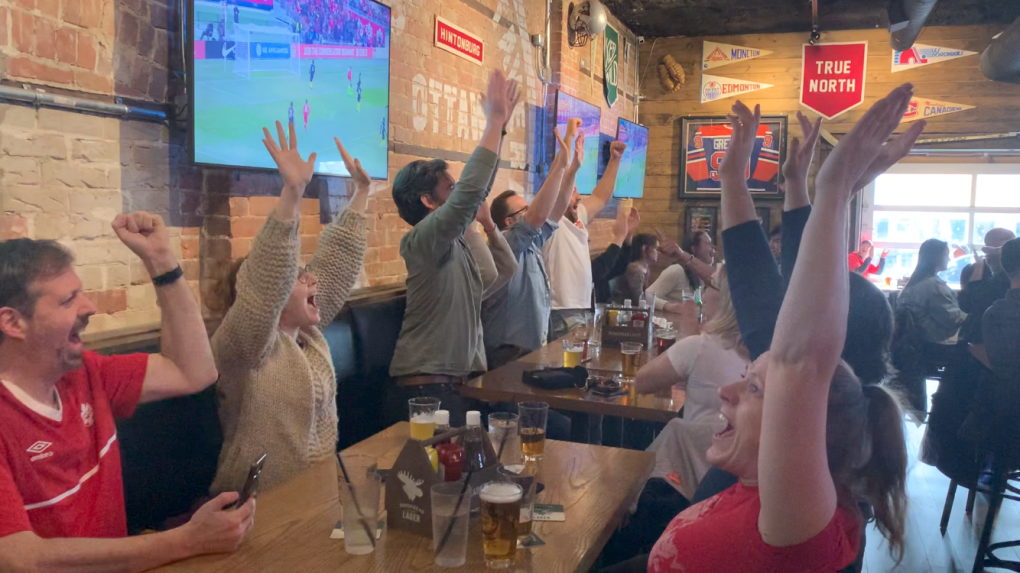 Soccer fans celebrate at the Senate Tavern as Canada beats Jamaica 4-0 to secure a birth in the World Cup. (Jackie Perez/CTV News Ottawa)

"Every other game we've filled up completely for it," said Steve Creaturo, Senate Tavern on Bank Street manager. "It's been pretty rowdy and it's been fun having people come out for it."

Canada beat Jamaica 4-0 at BMO Field in Toronto to secure a bid in the World Cup.

At the Senate Tavern, all eyes were glued to the TV screen for the game – a long-awaited chance for fans to see Canada punch a ticket to soccer's biggest tournament.

"I got my old school Umbra jersey and I’ve got the jersey underneath as well,” said Reda Ghazal, a long-time Canadian soccer supporter.

Ghazal has already secured tickets to 12 matches at the World Cup in Qatar, the host for this year's tournament.

"I got as many games as possible to trade if need be for Canada games,” Ghazal said. "I’m there for 12 days. Third World Cup and finally get to wear my Canadian jersey.”

The last and only time Canada appeared in the World Cup was in 1986.

"This is part of our history,” said Joe Fournier, program director and coach at Louis Riel Soccer Academy. "And I think people are realizing it.”

Fournier, who spoke with CTV News from Toronto, travelled to BMO Field to witness the action in person.

"I’ve supported the national team since forever, but now it’s extra special because Jonathan is on the team," Fournier said, referring to Canadian player Jonathan David of Ottawa.

The 22-year-old striker was coached by Fournier in high school.

Whether it’s rooting on the national team at BMO Field in Toronto or from here in Ottawa, for supporters across the nation this moment is everything.

"A good very patriotic day,” said Ghazal. "Canada soccer finally being as popular as I hoped it would be.”