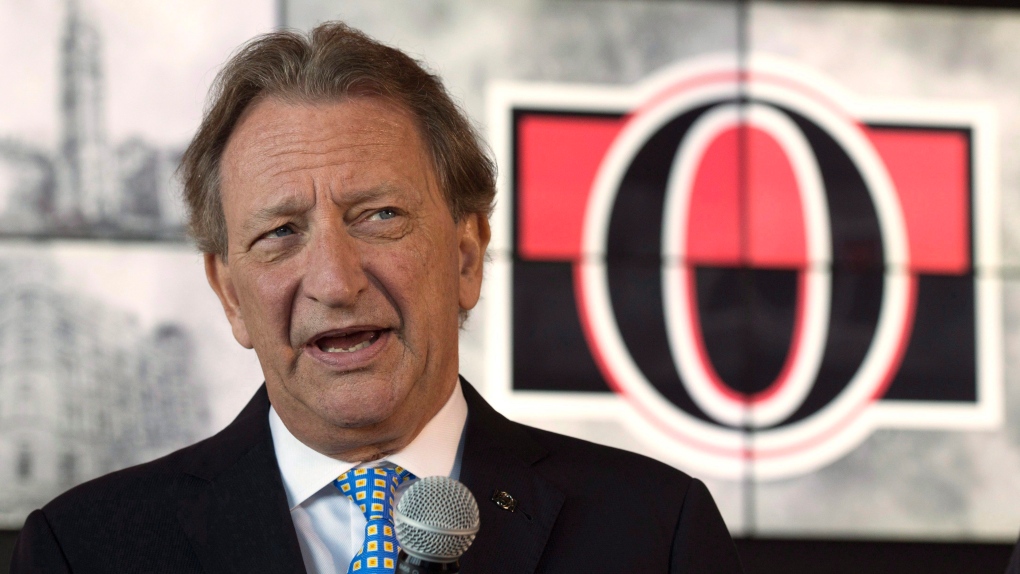 The Ottawa Senators will play the Ukrainian national anthem before every home game for the rest of the season.

The team is also diverting money from 50/50 draws at the Canadian Tire centre to help humanitarian groups working on the ground in the region as Russia continues its assault on the country.

“Today, we are all Ukrainian,” Senators owner Eugene Melnyk said in a statement announcing the measures. “The unprovoked assault and the ensuing carnage, unnecessary human, economic and social destruction of a sovereign country is unspeakable and unacceptable in a civilized world.”

“And while the images from Ukraine show courage and resilience, they also cry out for help.”

Melnyk’s parents were both born in Ukraine, and he calls himself both a proud Canadian and a proud Ukrainian.

Along with playing the Ukrainian national anthem at 13 remaining home games, the Senators will donate proceeds from 50/50 draws at the Canadian Tire Centre to organizations providing humanitarian and medical relief in Ukraine.

Melnyk said the team is also working with the Ottawa’s Ukrainian community to set up the Canadian Tire Centre as a drop-off point for clothing, medical supplies and other items for people in Ukraine and those who have fled to nearby countries.

"I am confident that our collective actions and contributions will make a significant difference in the lives of Ukrainians who are currently under siege," Melnyk said.

The hockey world has taken steps to punish Russia amid the ongoing invasion. The International Ice Hockey Federation has suspended the Russian and Belarussian teams, and the NHL has halted ties with Russian business partners. Melnyk said he supports those measures.

The Senators have four games left on a U.S. road trip. Their next home game is March 10 against the Seattle Kraken.

Ukrainians fleeing Russian forces wait hours to get into Poland

Unprepared and low morale: Military experts on the early days of Russia's invasion of Ukraine

'Wars are won by people who show up': Foreign fighters head to Ukraine

Here are the companies pulling back from Russia

What are thermobaric weapons?