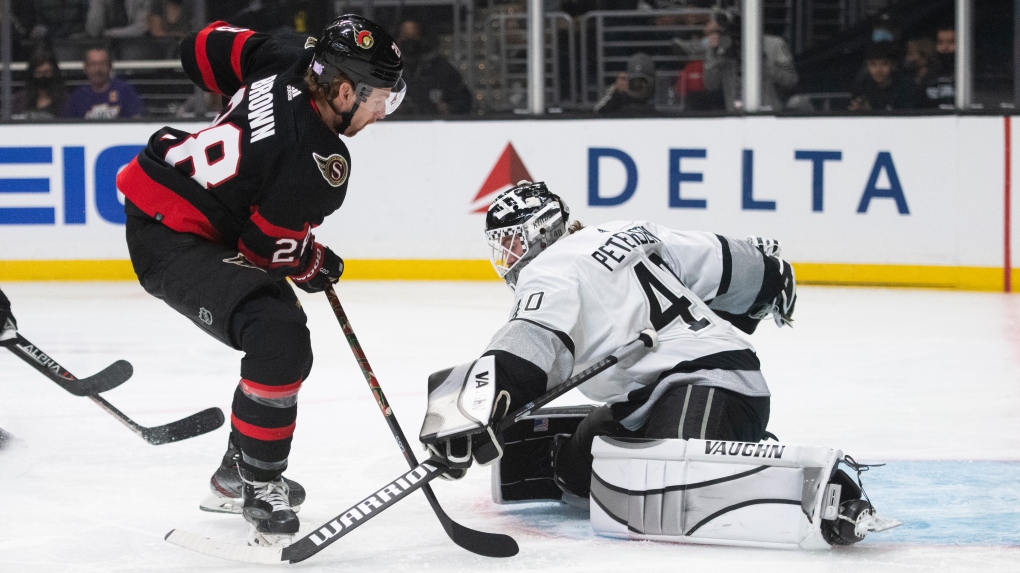 Carl Grundstrom scored twice and the Los Angeles Kings snapped a five-game losing streak with a 4-2 win over the Ottawa Senators on Saturday night.

Viktor Arvidsson had a power-play goal and Arthur Kaliyev also scored for the Kings. Cal Petersen made 30 saves and Anze Kopitar had three assists.

"We were desperate for a win, and wins help no matter how you get them. I thought we played a fairly solid game there," Kings coach Todd McLellan said.

Filip Gustavsson allowed three goals on 36 shots, and Connor Brown and Michael Del Zotto scored for the Senators, who lost their fifth straight. Ottawa is 1-7-1 on the road, including five consecutive defeats in regulation.

"Everybody's got to play for each other," Senators forward Nick Paul said. "The only people that are getting out of this is us, so we got to find a way here, and there's no more excuses. We just got to get it done."

Kaliyev netted his fourth goal to push Los Angeles' lead to 3-1 with 6:46 left in the second period, finding himself alone at the right post to score off a pass by Alex Edler.

But Brown scored off the rush, getting the Senators back within a goal with 1:27 left in the period.

Los Angeles had to withstand a five-minute power play in the third after Brendan Lemieux received a match penalty during a confrontation with Brady Tkachuk had them grappling from the clinch on the ice. Tkachuk indicated that Lemieux bit him on the hand.

Grundstrom, who served the penalty, came out of the box to score an empty-netter with 33.9 seconds remaining.

"I thought when `Grunny' got his opportunity to go, he made good on his shift. And he seemed to be playing with some energy," McLellan said.

The Kings started the scoring with Arvidsson's fourth goal, tipping in a pass by Kopitar on the power play 4:59 into the game.

Los Angeles is 3 for 7 on the man-advantage in two games following a 1-for-19 slump during the previous seven.

Del Zotto tied it at 1 with 18.9 seconds left in the first. Josh Norris won the faceoff and got it back to Del Zotto, who fired a shot that deflected in off the stick of Kings forward Alex Iafallo.

Grundstrom put Los Angeles back ahead 2-1 midway through the second period, barreling into Gustavsson as the puck crossed the line. Officials decided the contact happened because Zach Sanford forcibly sent Grundstrom into the goalie, confirming his fourth goal after a brief conversation.

Ottawa coach D.J. Smith chose not to challenge the play. "After looking at it between periods, everyone's confident that would have stayed as a goal," he said.

Ottawa put goalie Matt Murray, who is 0-5-0 with an .890 save percentage and 3.26 goals-against average in six games this season, on waivers Saturday. Murray signed a four-year, $25 million contract with the Senators shortly after being acquired from Pittsburgh in a trade in October 2020, but he has missed time this year because of an upper-body injury, illness and COVID-19. Murray, who helped the Penguins win the Stanley Cup in 2016 and 2017, will be assigned to the AHL if he clears waivers, Smith said.

McLellan said Lemieux, who has become a staple on the fourth line, needs to be careful not to cross the line in instances like his fracas with Tkachuk and expressed concern it could result in a suspension.

NOTES: Kopitar had his fifth multi-point game of the season. It was the 250th such game in his career, which ranks fifth in the league since making his NHL debut in 2006. ... Ottawa claimed C Adam Gaudette off waivers from Chicago on Saturday. Gaudette, who had one goal and one assist in eight games for the Blackhawks this season, was scratched along with G Matt Murray and D Lassi Thomson. ... The Senators assigned F Parker Kelly to the AHL to free up a roster spot.

BREAKING | 8 people dead after storm rips through Ontario; tens of thousands without power

Ahead of his one-year anniversary on the Supreme Court of Canada this July, Mahmud Jamal spoke with CTV National News National Affairs Correspondent Omar Sachedina to reflect on his past year on the bench.

Afghanistan's Taliban rulers on Sunday began enforcing an order requiring all female TV news anchors in the country to cover their faces while on-air. The move is part of a hard-line shift drawing condemnation from rights activists.