The final decision will be subject to full council approval.

This is the largest construction project in Ottawa's history and the Ontario government has committed up to $600 million towards rapid transit in the capital.

"We'll be doing it on time, on budget, and with a fixed price," says Ottawa mayor Jim Watson.

The new LRT system will be named the Confederation Line, will run from Tunney's Pasture to Blair Rd and will include a downtown tunnel.

"I think it will be easier for people to get around. Right now the buses are just way too packed. We just need more room," says transit user Seda Floyd.

"Now the Ottawa U students can travel from East to West. I go to Ottawa U so for me personally it's going to be very beneficial," says another transit user Gabriel Parent.

Ottawa city council will deliver a final vote on the light rail project in two weeks.

It is expected to be fully operational in May 2018. 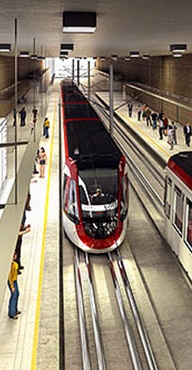