Inside Ottawa’s Westgate Mall on Carling Avenue, a bright blue banner is draped across a storefront.

It announces the end of an era.

Nettleton’s Jewellery, a beloved and enduring family business, is closing after 106 years. Its owners are retiring.

“As they say, we’re not as young as we used to be,” smiles co-owner Geoff Nettleton.

“We thought it was a good idea while we still had our health to enjoy life for a while and have a vacation, a couple of days off and maybe a lunch hour,” laughs Geoff’s brother, Cameron.

The Nettleton brothers have been trying to slow their pace at the store, but customers are still keeping them busy every day: changing watch batteries, appraising family heirlooms, and selling gifts for all occasions.

Such is the legacy of a retail gem to which jewellery lovers have taken a shine for more than a century.

“My grandfather came to Ottawa in 1916 from his father’s store in Penetanguishene which was opened in 1896.”

The Nettleton’s grandfather, George, and a business partner opened Nettleton and Haskett Watchmakers on Ottawa’s Queen Street and would later move the business to Bank Street. 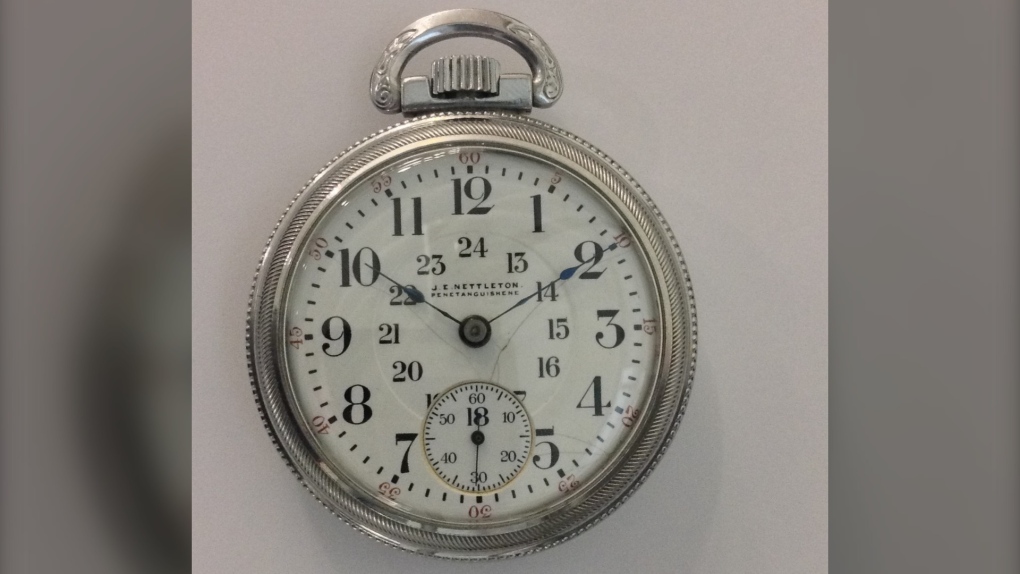 A time piece sold by J.E. Nettleton in his Penetanguishene store which opened in 1896. His son George, along with a business partner, opened Nettleton and Hackett Watchmakers in 1916 on Ottawa’s Queen St. The Nettleton’s were longtime watch inspectors for the Canadian National, Canadian Pacific and Grand Trunk Railways. (Supplied)

The store was perhaps best known for its inspections of timepieces used by employees of the Canadian National, Canadian Pacific and Grand Trunk Railways.

“The employees would have to come back in every six weeks back then to have a card updated, to make sure they had a watch on, and that their watch was on time, so that the trains ran on time because there were no computers,” said Cameron Nettleton. 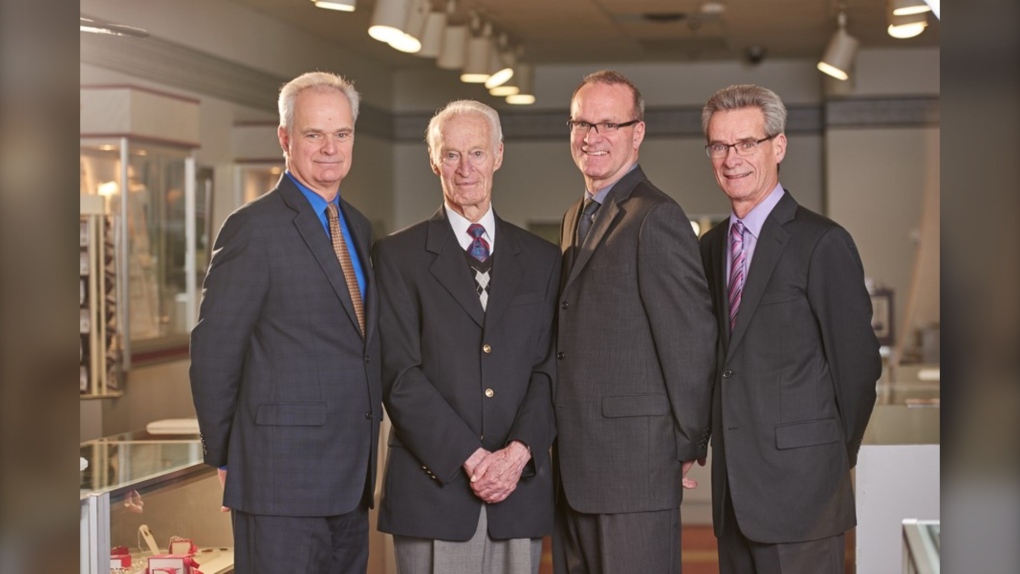 (From left to right)Cameron, Douglas, Geoff and Richard Nettleton. Douglas took over the business from his father, George, in 1947. His sons began working with their father in the 1970’s. The store has operated in Ottawa since 1916. (Photo: Canadian Jeweller Magazine)When George died in 1947, his son Douglas would take the reins. His sons Richard, Cameron and Geoff joined the family business in the 1970’s.

“1975. I was married in October and in the middle of November, my wife said to me ‘If you don’t get a job, go work for your father.’ Forty-seven-years later I’ve been here,” said Cameron.

“I started in the workshop at age 15 doing repairs and later started full-time,” said Geoff. “I enjoyed working with my hands and working with customers, so it was an easy fit.”

Geoff and Cameron’s brother Richard remains a co-owner but has already retired.

“We’ve been extremely fortunate. We’ve been our own bosses for all of our lives and have met so many wonderful people.  But after working for 48 years, it’s time to enjoy ourselves and our families,” said Geoff. 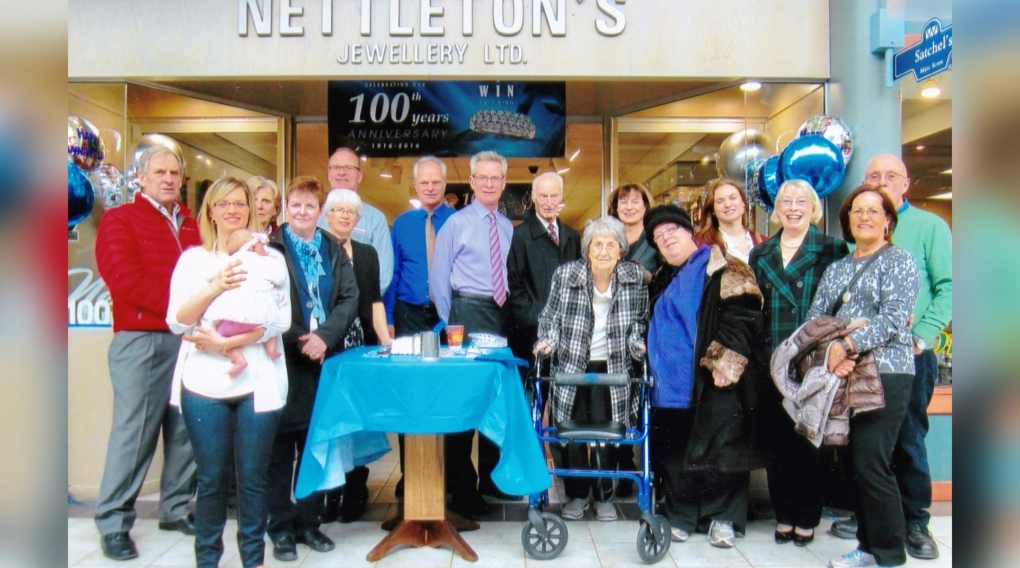 The Nettletons in front of the family’s Westgate Mall store, celebrating the 100th anniversary of Nettleton’s Jewellery. (Supplied)

Over the years, the Nettleton family has had stores in various locations in the city.

Its downtown stores were particularly popular with shoppers.

“Oh my gosh, downtown at Bank and Albert there was a ring section, a watch section, a crystal section and a spare repair counter,” said Geoff.

“When most office workers had an hour and a half for lunch, between 11:30 and 1:30, the store would be jam-packed. You’d be catching your breath after. It was great,” said Geoff.

The family’s Westgate Shopping Centre store has been open for 35 years and is now its only location.

A familiar refrain of  Douglas Nettleton still fuels the Nettleton brothers’ shifts at the store.

And those customers have meant everything to the Nettletons. The family’s business has forever been at the centre of joyous celebrations.

“We’re just down from the hospital and quite often we’ll get a gentleman in saying ‘My wife just gave birth and I need to buy her a gift’, said Geoff with a smile. 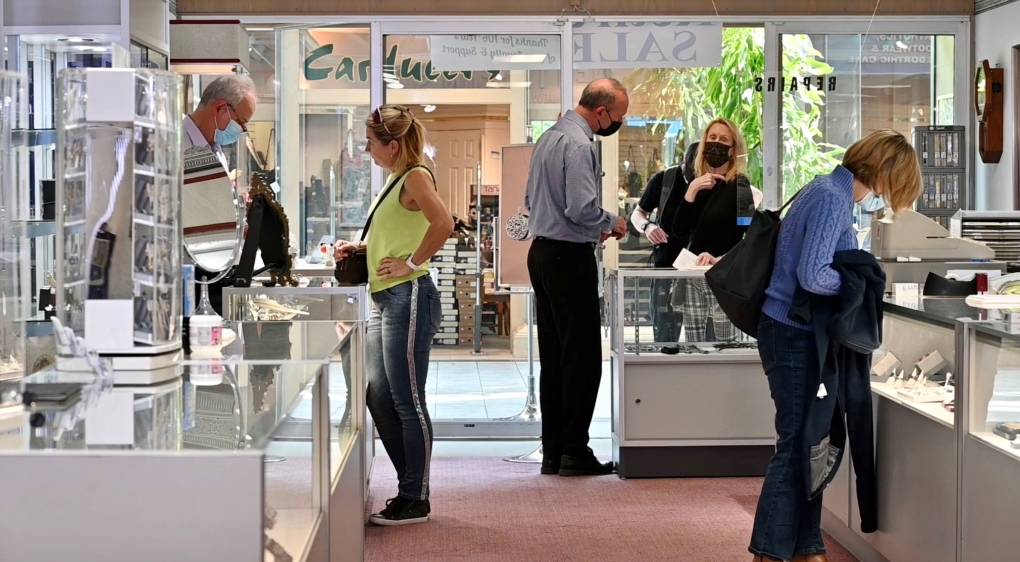 The Nettleton’s lease is ending soon, Westgate Shopping Centre is undergoing changes, and the brothers are in good health.

The time is right, they say, to start that next chapter.

“We’re going to leave on our own terms and get out ahead of the game.”

Until the store closes early in the New Year, the brothers will continue to serve their loyal customers.

The next generation of Nettletons has chosen careers outside of the retail jewellery business.

“As we keep saying, we sent our children to school and they all have jobs with pensions and benefits,” laughed Cameron.

When the doors finally close at Nettleton’s Jewellery, brothers Cameron, Richard and Geoff will look to the future with excitement, treasuring the most precious jewel of all—life.

“Spend more time with my wife, my kids, my grandkids, and father,” said Geoff with a wide grin.

“I’m going to read a newspaper from one end to another, take my time and then it will be snacks and Chardonnay at 4 o’clock.”

Prime Minister Justin Trudeau will be presenting the federal government's offer for billions in new health-care funding to the provinces and territories at a highly anticipated meeting in Ottawa today.

Search teams and emergency aid from around the world poured into Turkiye and Syria on Tuesday as rescuers working in freezing temperatures dug, sometimes with their bare hands, through the remains of buildings flattened by a powerful earthquake. The death toll soared above 6,200 and was still expected to rise.

One-third of households say they're financially worse off compared to year ago: poll

Ottawa says Canada will contribute $10 million to earthquake relief efforts in Turkiye and Syria as part of an initial aid package.

Germany, Denmark and the Netherlands say they plan to provide Ukraine with at least 100 refurbished Leopard 1 battle tanks.

A former London police officer was sentenced Tuesday to life in prison with a minimum term of 30 years for raping and sexually assaulting a dozen women over a 17-year period.

Canada’s yearslong shortage of veterinarians was exacerbated during the pandemic, as more people welcomed pets into their homes to add joy and companionship during lockdowns. Now, concerns around quickly accessing medical care for animals is more urgent than ever, says one vet.