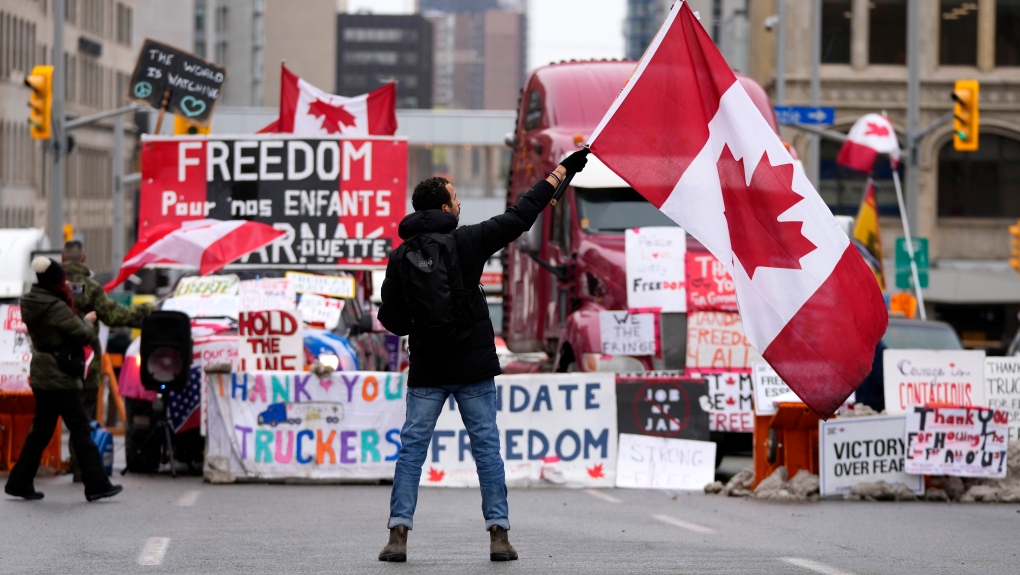 A protester waves a Canadian flag in front of parked vehicles on Rideau Street on the 15th day of a protest against COVID-19 measures that has grown into a broader anti-government protest, in Ottawa, Friday, Feb. 11, 2022. THE CANADIAN PRESS/Justin Tang

Do you have an opinion about how the city and Ottawa police handled the ‘Freedom Convoy’ protests earlier this year? Now’s your chance to talk about it.

The city’s auditor general is holding two virtual public consultations next week as part of her probe into the city’s response to the “Freedom Convoy” protest.

“These consultations are aimed at helping our Office gain a better understanding of how residents were impacted during the protest and how, if any, City services and programs could have been improved,” a post on the office of the auditor general’s website said Monday.

The Zoom meetings will be held on Tuesday, July 12 from 5 to 7 p.m. and Wednesday, July 13 from 11 a.m. to 1 p.m. People who wish to participate must register beforehand.

Those who want to have input but don’t want to take part in the sessions can instead fill out a survey until July 31.

The Ottawa Police Services Board voted in late March to ask Nathalie Gougeon, the city’s auditor general, to perform the audit.

The AG’s office has been working with city and police staff to gather information and conduct interviews, the note on Monday said.

They have also been coordinating with the multiple federal reviews into the convoy and its aftermath.

“We have been coordinating our work for this audit with other agencies performing a similar scope of work, including the Public Order Emergency Commission, to avoid duplication of efforts and ensure appropriate spending of taxpayer dollars.”

The public consultations will have simultaneous English, French and sign language interpretation. A phone number will be provided for those without Internet access.

Three years after new rules came into force, the regulator overseeing Canadian airlines has not issued any fines related to passenger compensation claims for flight delays and cancellations.

Afghan man charged in killing of 2 Muslims in Albuquerque

A 51-year-old man from Afghanistan was charged Tuesday with killing two Muslim men in Albuquerque, New Mexico, and authorities said he is suspected in the slayings of two others whose deaths sparked fear in Muslim communities countrywide.