Ottawa police are asking for the public's help identifying two people in connection with an arson investigation in a Centretown high-rise.

In a news release, police said the incident occurred in the early morning hours Sunday at a building on Lisgar Street near Metcalfe Street. Two people were pictured, and police said at least one of them attempted to start a fire in the building.

Photos shared by police show two individuals, described by police as "persons of interest." Both appear to be white men. One was wearing a dark, puffy jacket over a red sweater and dark pants. He had dark-coloured, possibly purple hair and was clean-shaven. He was not wearing a face covering. The second individual was wearing a dark jacket and blue gloves. He was bald and had a beard. One photo shows him with a face mask hanging off of one ear.

Residents of the building tell CTV News Ottawa they found fire starter bricks in the lobby. The front doors were also forced closed and sealed with tape.

"It could’ve gone so wrong and so many people would’ve been hurt or died, so we’re all really shaken up, but we’re sticking together," said building resident Matias Muñoz.

Muñoz said a bystander saw the flames and was able to get the door open and extinguish the fire before it became too dangerous.

"The bystander outside who saw the flames came in and was able to unhinge that door, even though it was tied up, and was able to come in and extinguish it was incredible," he said. "Whoever he is, we’re very thankful. If that wood panelling in the lobby had caught fire it wouldn’t have taken long for the whole building to go up."

Living in Centretown during the ongoing demonstration has brought many people to their limits, he added. 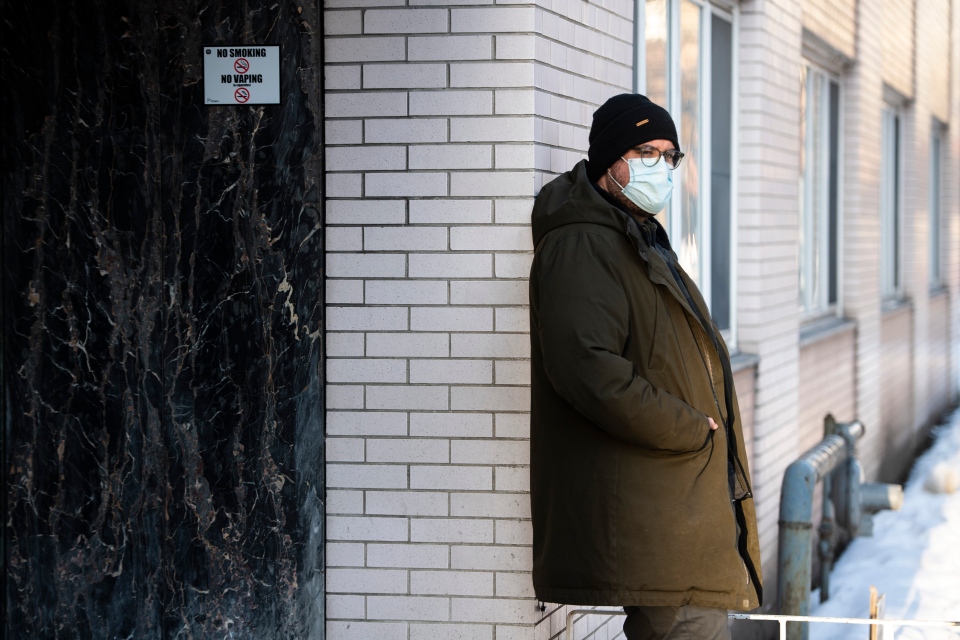 Matias Munoz stands outside his apartment on Lisgar Street, where police are investigating what appears to be an attempt to start a fire in the building’s lobby, in Ottawa, on Monday, Feb. 7, 2022. Tenants say they have been besieged by anti-vaccine mandate protesters raging in the national capital for more than a week. (Justin Tang/THE CANADIAN PRESS)

"We feel terrorized. It’s scary, there’s been widespread harassment and abuse hurled at members of the community, especially marginalized folks. We’re exhausted and scared, there’s like a dark cloud hanging over us. We hope that police can step up enforcement and protect our community."

Another resident of the high-rise told CTV News Ottawa many people in the building are scared.

"Taping the door shut, setting the fire in the place where everybody would go to try to get out, is terrorism. There’s no other word."

The building is in what police call the "red zone" of the "Freedom Convoy" demonstration. At this time, there is nothing linking the incident to the ongoing demonstration, now in its 11th day.

Anyone with information on either the incident or the identity of the individuals pictured is asked to contact the Ottawa Police Arson unit at 613-236-1222 extension 4587 or 3771 or leave an email at arson@ottawapolice.ca

Information can also be submitted anonymously by calling Crime Stoppers toll-free at 1-800-222-8477, or by visiting www.crimestoppers.ca.