The 'secure area' in downtown Ottawa was made smaller Tuesday, as police reopened more streets to the south of Parliament Hill.

It's part of an effort to restore a sense of normalcy to the downtown core following the three-week long "Freedom Convoy" protest that had filled city streets with heavy trucks and protesters.

Police said Tuesday afternoon that the secure area, which extended south to Somerset Street West Tuesday morning, has been decreased to an area bordered by Parliament Hill in the north, the Rideau Canal in the east, Laurier Avenue in the south, and Bronson Avenue in the west.

Additionally, police reopened Sparks Street--still within the perimeter--to pedestrians with gate access at all intersections but Sparks and Elgin St.

Many businesses in downtown Ottawa reopened their doors again Tuesday and services that had been unavailable since the end of January have also resumed. Construction at Parliament's Centre Block is also underway again after being suspended because of the convoy nearby on Wellington Street.

The Rideau Centre mall reopened Tuesday, but later had to close because of a police operation that ended in an arrest. The police have since cleared the mall and the mall's owner says they are again open for the rest of the day.

The mall had been closed since Jan. 29 when it was flooded with maskless protesters on the first weekend of the convoy demonstration.

"We look forward to welcoming back our community of clients, shoppers and employees!" said a statement from the mall's owner, Cadillac Fairview.

EXCITEMENT BUT ALSO TREPIDATION FOR RETURN TO NORMAL

One worker who spoke to Newstalk 580 CFRA's Ottawa Now with Kristy Cameron on Monday said she's happy to be getting back to work, but she's also concerned.

"I'm elated. I'm very glad it's opening. My owner texted me to come to work on Tuesday so I'm very excited, although I am a little bit worried about what might happen," said Roberta, who works at a store in the mall. "I have confidence in the police and the mall security, but who knows what might happen, right? So, I'm kind of a little bit worried but I'm very glad to get back to work, that's for sure."

That mixture of excitement and trepidation has been a common refrain among business owners as well.

Sarah Chown, managing partner at Metropolitain Brasserie told CTV News Ottawa she had grown accustomed to the situation just outside the doors of her restaurant at Rideau Street and Sussex Drive, but now that the trucks are gone, it's a new reality.

"It almost felt like it was the new normal because we saw it every single day for 20-plus days and now, to see it back and empty, is equally as bizarre almost," she said.

Chown said being closed during the occupation meant a loss of hundreds of thousands of dollars. She's glad that some of the police checkpoints are coming down.

While the "secure area" in downtown is smaller than it was over the weekend, some business owners are still inside the perimeter.

"I’m in a perimeter within a perimeter so it’s definitely different for sure," explained Victoria Barber Shop owner Robin Seguin." Getting here, you know unless you have a House of Commons pass or a Senate pass there’s no getting in here."

The House of Commons voted Monday night in favour of a motion to approve the extraordinary and temporary measures in the Emergencies Act, which Prime Minister Justin Trudeau invoked last week in a bid to end blockades in Ottawa and at several border crossings.

The motion passed with a vote of 185 in favour to 151 against, with the New Democrats voting alongside the governing Liberals. MPs with the Conservative Party of Canada and the Bloc Quebecois opposed the motion.

The powers declared under the Emergencies Act are in effect for 30 days from the declaration of the emergency, which was made official last week. The Senate must also vote on the government's request.

The House, the Senate, or the government can pull support for the emergency powers at any time.

Interim Conservative leader Candice Bergen moved to table a motion to revoke the powers in the Emergencies Act immediately following the vote; however, it will not be debated until the House resumes sitting on Feb. 28.

The City of Ottawa says city services that were unavailable during the occupation are now reopening.

The Rideau branch of the Ottawa Public Library reopens today, as do the vaccination clinics at the University of Ottawa Minto Complex and at the Vanier South Hub, located at 311 McArthur Ave. All sexual health and harm reduction services at the Sexual Health Clinic on 179 Clarence St. and the Ottawa Dental Clinic on 40 Cobourg St. will also be open.

O-Train Line 1 service was fully restored from Tunney’s Pasture to Blair stations on Monday. OC Transpo Route 85 has resumed regular service to and from Gatineau.

The "secure area" cordon by police remains in effect, but its footprint has been significantly reduced.

Ottawa police say the secure area is now in effect in an area bordered by Parliament Hill in the north, the Rideau Canal in the east, Laurier Avenue in the south, and Bronson Avenue in the west.

Sparks Street is open to pedestrians via gate access at all intersctions but Elgin Street.

Residents should expect to see a significant number officers remain in the downtown core today. Those travelling through the smaller secured area will still need to pass checkpoints and explain their reason for being there.

"Residents may travel to the secured area if they have a lawful reason such as they live there, work there or are shopping and visiting businesses," police say. "Supporting local businesses is considered lawful if you are entering the Secured Area." 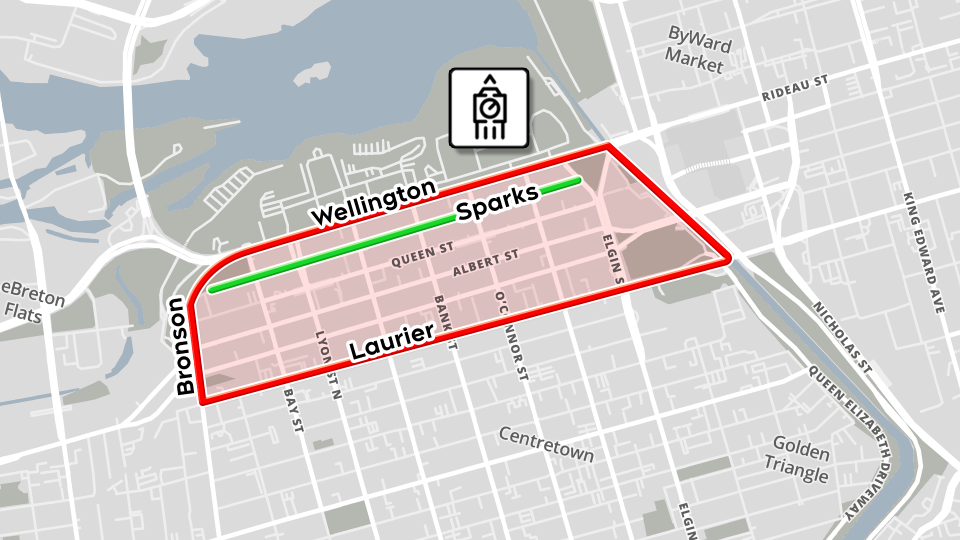 Fifteen bus routes serving downtown, as well as Para Transpo trips to and from Rideau-Vanier and Somerset wards, continue to be no-charge. This will be in place until 30 days after the City’s State of Emergency is lifted.

--With files from CTV News Ottawa's Colton Praill and The Canadian Press.

Don Martin: An emergency about nothing as tow trucks become the excuse to act

'Sense of relief' in Ottawa, but police efforts are not over, mayor says

Who is who? A guide to the major players in the trucker convoy protest