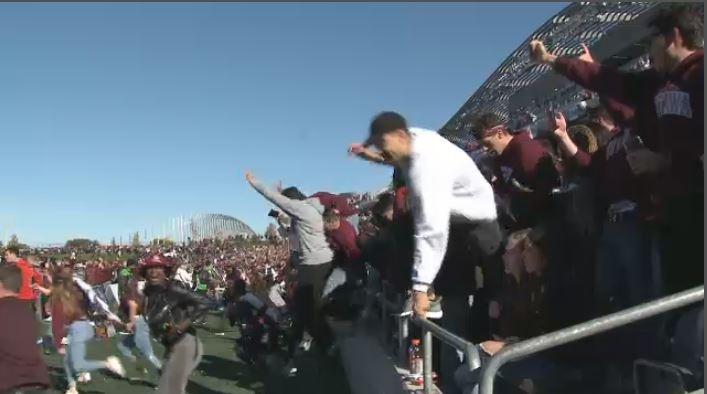 OTTAWA -- Ottawa police and bylaw services will be looking to keep the panda-monium to a minimum this year, as Ottawa gears up for the first Panda Game at TD Place in two years.

Police are promising to increase their presence in Sandy Hill, Old Ottawa South and the Glebe, along with around TD Place, before and after Saturday's football game.

The University of Ottawa Gee-Gees and the Carleton Ravens meet Saturday afternoon in the annual football game between the two schools for bragging rights. This is the first Panda Game since 2019 after last year's OUA football season was cancelled due to the COVID-19 pandemic.

Police say there will be an "increased presence in several downtown neighborhoods to ensure safe and law-abiding celebrations" surrounding the game.

Officers will be on the lookout for trespassing, public drinking and intoxication and other social disorder.

Under Ontario's COVID-19 restrictions, indoor social gatherings are capped at 25 people, while outdoor parties are limited to 100 people.

Two years ago, bylaw officers were kept busy by the pre-game and post-game festivities.

"During the 2019 Panda Game, BLRS officers, along with Ottawa Police, proactively monitored the neighborhoods surrounding the University of Ottawa and Carleton University. BLRS responded to 130 requests for service relating to noise, and no requests related to public urination," said Tania McCumber, Acting Director of Ottawa Bylaw and Regulatory Services.

"We want to remind everyone to celebrate safely by respecting social gathering limits, and applying public health measures such as physical distancing, and mask wearing."

Party safer and party smart. Don’t invite us to your #PandaGame party.

Coun. Shawn Menard tweeted on Tuesday that Carleton University was communicating with residents about the annual football game.

Carleton University plans to do a clean-up of Old Ottawa South and the Glebe following the game on Saturday and again on Sunday.

The Panda Game was first held in 1955, and was revived in 2013 when Carleton University returned to OUA football action.

Thank you to @Carleton_U students for your excellent communication with residents about the Panda Game this year! Makes a huge difference. I have a slice of @uOttawa in @CapitalWard but as an alumni Go Ravens! @CURavens @CUSAPresident @CU_President @CarletonAlumni @gsacarleton pic.twitter.com/iR0BcBVxzY