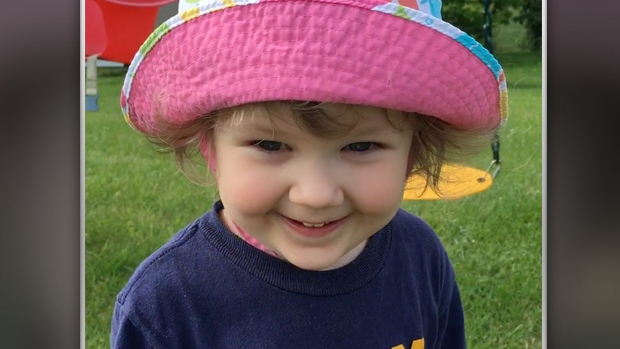 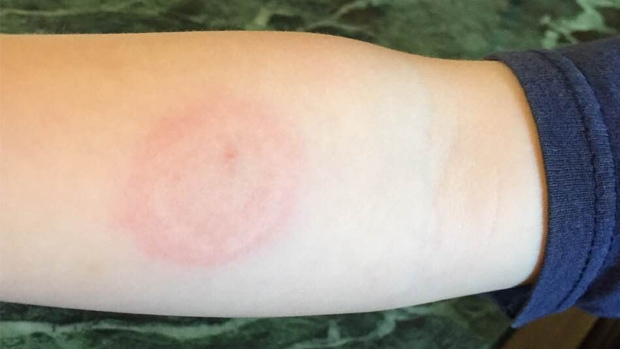 An Ottawa mother is warning parents to check their kids carefully for ticks after her toddler was diagnosed with Lyme disease over the weekend.

Jenny Willis believes her 2-year-old got bitten while playing in a backyard.

Willis knows more about deer ticks than she cares to; Lyme disease attacked her husband's heart 3 years ago.  Now her daughter contracted it, confirming current research by CHEO that Lyme cases among kids is significantly on the rise.

Like the puzzle that Grace and mom Jenny Willis are working on, it took some piecing together to figure out what was wrong with the talkative 2-year-old, who was suddenly not herself at all.

“We wouldn’t have known anything was wrong with her, really,” says Willis, “unless we had seen that rash and connected the fever and vomiting to the rash and put the whole picture together.”

It was this past Saturday when Jenny Willis figured that bite on Grace's arm was a little more concerning than they had initially thought.

Not a mosquito, her mom adds, but a black-legged tick carrying Lyme disease, leaving the telltale bullseye rash on Grace’s forearm. Willis says an emergency doctor at CHEO quickly diagnosed it and put Grace on antibiotics.

The question, though, is where Grace got the tick since Willis says she has only been outside at her house in Vars and at her daycare.

“It's not anyone's fault,” says Willis, “they don't know.  Because Lyme is so new to Canada, doctors don't fully understand it.  Daycare operators aren't aware that they should check children in their care and notify parents if one of the kids gets Lyme because other parents need to know.”

It is important information to know, according to doctors at CHEO who are currently researching Lyme cases among kids in this region.

Dr. Jason Brophy is an infectious disease specialist at CHEO, “We’re seeing a fair amount of Lyme disease in kids,” he says.

Dr. Brophy worked with pediatrics resident Dr. Stephanie Zahradnik and Ottawa Public Health to look at a ten-year population-level review of the rise of Lyme disease in Eastern Ontario.

“Here at CHEO, we are doing a chart review of all the cases we've seen of Lyme disease over the past 10 years,” says Dr. Brophy, “to demonstrate that we are seeing increase in the rate of Lyme in children and the different varieties so people are confident we're able to diagnosis and treat this disease.”

“We're seeing an increase in all age groups consistently throughout the years,” says Dr. Zahradnik, “6 to 10 is the commonest age of presentation in the diagnosis of Lyme but it is becoming more common in children of all ages.”

“This is a very treatable illness,” adds Dr. Brophy, “it is in the same family as syphilis and we know how to treat syphilis, too so people shouldn't be afraid if they get Lyme disease that no one will know how to treat it.”

The Willis family knows more than they care to about Lyme disease.  Three years ago, Grace's father Andrew was on death's door from Lyme disease that attacked his heart. It is called Lyme carditis, a rare infection that occurs when the Lyme bacteria enters the heart and affects the heart’s electrical system.

“The doctors told me had I not brought him in that day, he'd have died that night,” recalls Willis, “In fact, at 5:00 that evening after being admitted, he went into cardiac arrest.”

So, after a trip outside to play on the swing set in the back yard, a daily tick check is now standard procedure.

“Curing Lyme is so difficult,” says Willis, as she checks between Grace’s toes and around her neck, “I mean, an ounce of prevention is worth weeks or months of the cure.”

Willis says anyone can check for ticks in your back yard.  Grab a white sheet, attach it to a stick and drag it over your grass.  Then, get a magnifying glass and start looking.    She adds that we should not assume that just because we have not heard of ticks in our neighbourhood, that they aren't there or won't be soon.