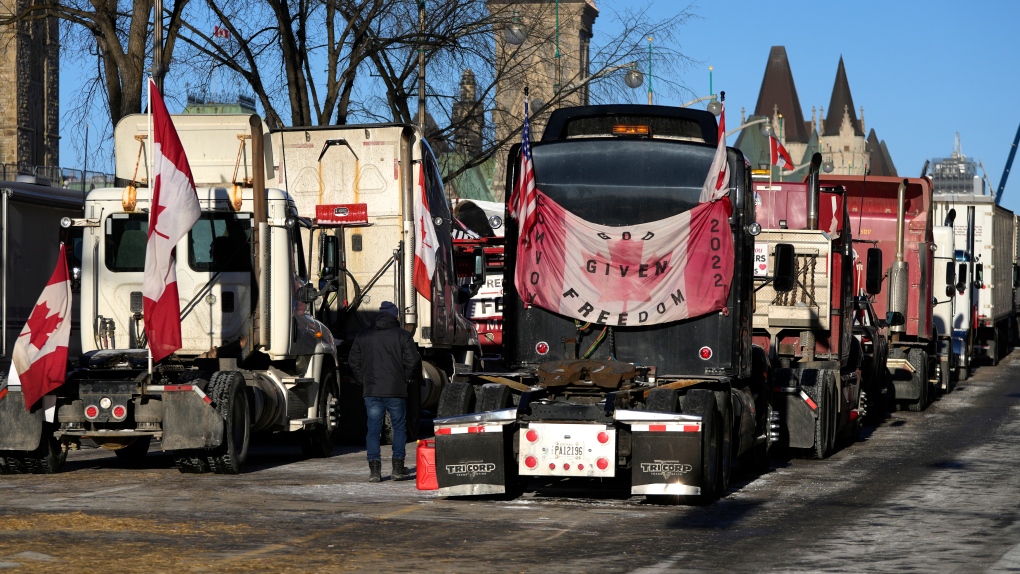 A person walks among trucks as Wellington Street is lined with trucks in Ottawa, on Monday, Feb. 14, 2022. (THE CANADIAN PRESS / Justin Tang)

Ottawa Mayor Jim Watson's office would not return a call from the Parliamentary Protective Service during the height of the "Freedom Convoy," its acting director told a committee Thursday evening.

Larry Brookson, the acting director of the service, told members of Parliament and senators during a joint committee hearing that he attempted to reach out to Watson and Ottawa's city manager during the protests that occupied downtown Ottawa for three weeks in February.

But he said he received responses from both of their offices that they weren't available to talk.

Brookson added that the mayor's office did not communicate with the protective service, which is responsible for security on Parliament Hill, about a failed deal between the city and convoy organizers to bring the protest to a negotiated end during its height.

The city did not immediately respond to a request for comment.

Brookson told the committee that he supports the extension of the parliamentary precinct to include Wellington Street, a change that is currently under review, and said that things would have gone differently if the road fell under his jurisdiction.

Despite his concerns, he said that the city and Ottawa police granted protesters permission to drive and park on the street, which faces Parliament but is not governed by parliamentary security.

"The streets would've been blocked" if he had been in charge, he said. "There would've been no vehicles permitted to come onto Wellington Street."

While police services provided updates on their operations that Brookson said were satisfactory, he said that because the security service is not a law enforcement body and was not part of joint operations between police forces, he sometimes lacked situational awareness about what was happening outside the Hill -- and he was not informed about the "daily posture" of police.

He said he was disappointed not to have more of a say in the decisions around Wellington Street.

"I think part of my disappointment is I thought I had more influence than what I actually did with the policing partners. I'll have to talk back with them on that one. I mean, it saddened me throughout," he said. "To suggest that people have to come to work and be under that sort of torment, irrelevant of where it was coming from, just doesn't sit well with me."

Brookson said that "tabletop exercises" are now being conducted with policing partners and "I'm very pleased and happy with the changes that seem to be occurring at the Ottawa Police Service."

Also testifying at the committee were sergeant-at-arms Patrick McDonell, who is the corporate security officer for the House of Commons, and his Senate counterpart Julie Lacroix.

The parliamentary hearings are underway as part of a study on the federal government's declaration of an emergency under the Emergencies Act.

Parliament's security actors testified that they did not receive any new powers under the state of emergency, and Brookson said he did not think that such powers would be necessary for the protective service to be able to govern a jurisdiction that includes Wellington Street.

Peter Sloly, who resigned as Ottawa's police chief in mid-February, had previously testified at the committee that placing Wellington Street under the protective service's jurisdiction would make sense but could be costly because the service is less equipped to respond to daily policing issues on the street.

This report by The Canadian Press was first published Sept. 29, 2022.

Help will arrive at the children's hospital in Ottawa next week as it continues to see "unprecedented volumes" of young patients suffering from respiratory viruses.

Montreal Canadiens goalie Carey Price has taken a stance against Ottawa's controversial Bill C-21, which would refine the definition of prohibited assault-style firearms -- drawing the ire of Canadian hunters who say the definition would outlaw weapons used within their practice. Meanwhile, the Liberals have repeatedly stated their intention is not to go after hunters but to restrict certain firearms designed for the "battlefield."

New research has found that climate change could cause more than 100,000 tonnes of micro-organisms to be released into natural ecosystems every year, a result of melting glaciers in the Northern Hemisphere. The ramifications of this, however, remain unknown.

Intergovernmental Affairs Minister Dominic LeBlanc says the federal government is taking a wait-and-see approach to whether it may intervene when it comes to Alberta Premier Danielle Smith’s sovereignty act, but that it is not the focus at the moment.

Peel police are searching for a murder suspect who was last seen running away from a Missisauga gas station.