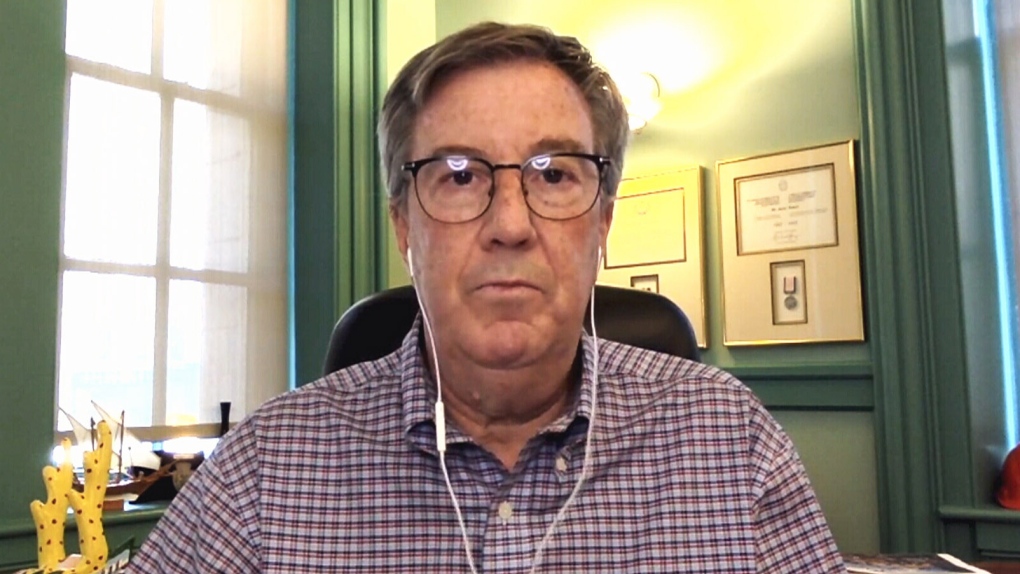 Ottawa mayor Jim Watson has been banned from Russia, part of escalating sanctions due to Russia’s invasion of Ukraine.

Watson is one of 61 people including politicians, senior bureaucrats, military officials and other notable Canadians whom Russia is banning from travelling there.

The Russian foreign ministry said in a statement announcing the people sanctioned are “directly involved in the development, substantiation and implementation of the Russophobic course of the ruling regime in Canada.”

Watson issued a statement saying he assumes he’s on the list because he asked city staff to install ‘Free Ukraine’ street signs outside the Russian embassy.

“I do not take this ban seriously and I will continue to speak out against the war crimes being committed by Putin.”

Canada has imposed strict sanctions on the Putin regime due to Russia’s invasion of Ukraine in February.

On Tuesday, the federal government announced new sanctions on 14 close associates of Russian president Vladimir Putin, including his daughters.

Along with Watson, newly-sanctioned politicians include premiers Doug Ford of Ontario, John Horgan of B.C., Jason Kenney of Alberta, Scott Moe of Saskatchewan and Heather Stefanson of Manitoba. Toronto mayor John Tory has also been banned.

Former senator Romeo Dallaire is on the list, along with Bank of Canada governor Tiff Macklem and U.N. ambassador Bob Rae.

I assume my name was added to this most recent list since I asked staff to install 'Free Ukraine' street signs outside of the Russian embassy. I also recently wrote to other G7 mayors requesting that they stand in solidarity with the people of Ukraine as they face an illegal 1/2 https://t.co/jzKK5T0WsT pic.twitter.com/NgZWxK3KLg

The Supreme Court of Canada says the expanded rules to further prevent a sexual assault complainant's past from being used against them in a trial are 'constitutional in their entirety.'

Stocks are down, but here's why experts say you shouldn't panic

As stocks continue to slump, it can be easy to let your emotions take over if you've got money invested in the market. But experts agree that there's no need to panic if you're invested in the right type of portfolio with the right level of risk.

More than a month after Canada reported a shortage of baby formula for allergic infants, Health Canada says supplies will continue to be limited during the summer even with new shipments on the horizon.