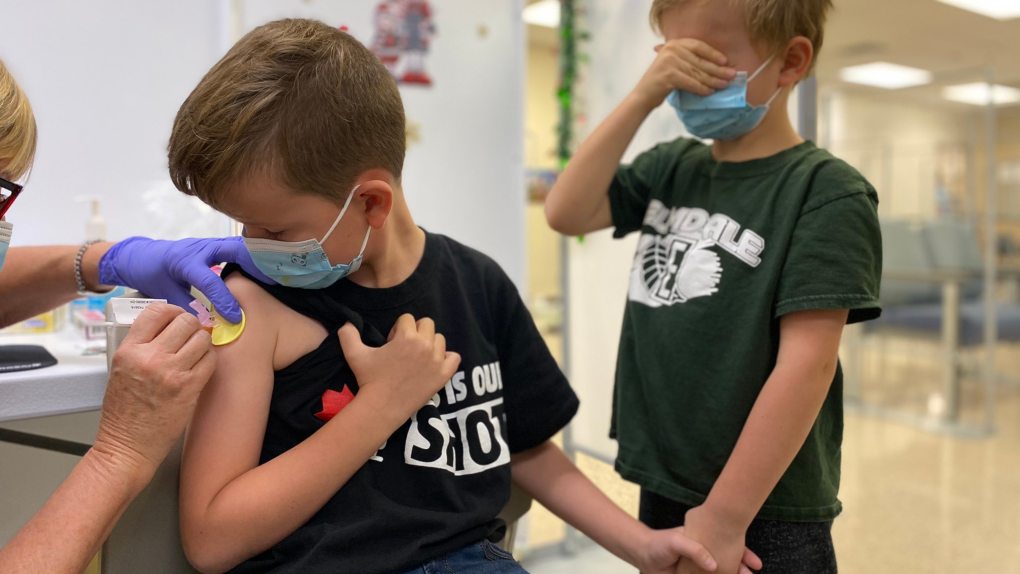 Sam and Noah receive the COVID-19 vaccine for kids at the Queensway Carleton Hospital on Friday, Nov. 26. (Photo courtesy: Twitter/QCHOttawa)

One-quarter of Ottawa children between five and 11 years old have received their first doses of the COVID-19 vaccine, the highest rate of any public health unit in Ontario.

More than 19,000 newly eligible children have received their shots since appointments began last Friday, Ottawa Public Health says. That’s about 25 per cent of all children in that age group.

The rate outpaces the provincewide pace so far. As of Friday, nearly 155,000 Ontario children aged five to 11 had received their first doses—about 14.4 per cent.

Ottawa’s uptake among children is the highest among all of Ontario’s 34 public health units. Timiskaming is second at 23.7 per cent, and Algoma District is next at 22.4 per cent.

Ottawa Public Health has said it has the capacity to vaccinate 77,000 eligible children between five and 11 years old within four weeks. The uptake so far puts the health unit on pace to meet that goal.

"We remain confident that there is enough system capacity in Ottawa to ensure that any five to 11 child who would like a vaccine can receive a vaccine," OPH said in a statement Friday.

The health unit is ramping up efforts to vaccinate children beyond appointments at community clinics through the provincial portal.

It’s holding pop-up clinics at 73 different schools this month. They started yesterday and run through Dec. 23.

You can find a list of clinics happening this week here.