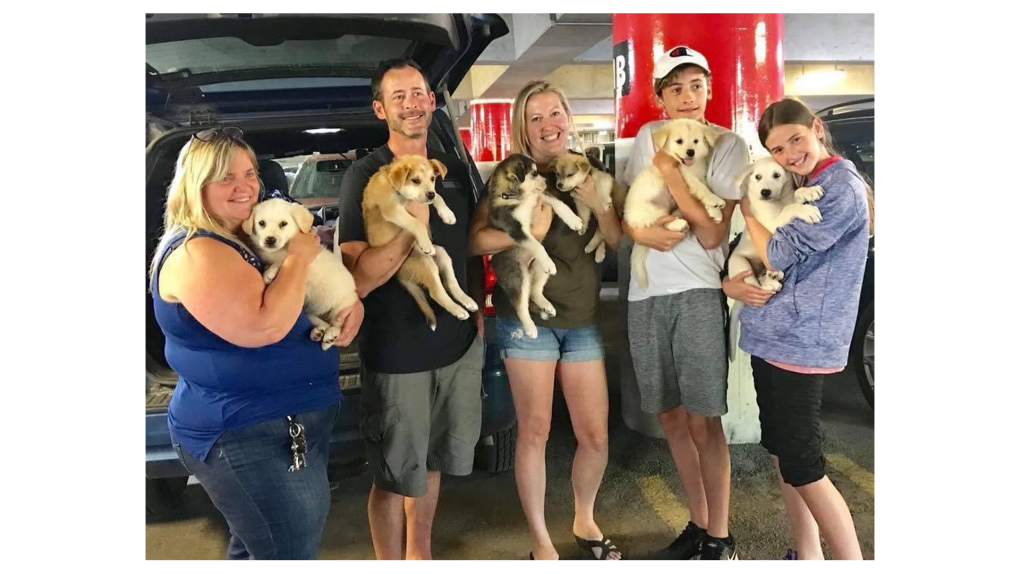 Two Ottawa kids had a couple of unusual travel companions on their flight home from visiting grandma in Winnipeg.

They were accompanying six puppies that had been rescued from a reserve up north and will find homes here now.

It's a big deal flying solo across the country for 13-year-old Hayden Leroux and his 11-year-old sister Ava.

But add to that now being responsible for ferrying six frisky pups to Ottawa; it made for a rewarding trip and a terrific story.

The puppies may no longer be in their care, but it's fair to say they'll always be in the hearts of Hayden and his sister Ava who have clearly grown attached to the little guys.

“Oh my gosh, yes,” says Ava, holding the smallest of the lot, “I love this one, Hugo.  I wanted him so badly but I have to remember I already have a lot of dogs.”

Ava and Hayden were in Winnipeg recently visiting their grandparents when their mom came up with the idea that the kids could volunteer to accompany some rescue pups home with them to Ottawa.

“They can't really fly in the planes alone,” says Hayden, “so our mom booked us a flight with them and they got a free ride with us.”

They signed on with an Ottawa charitable organization called Freedom Dog Rescue to bring the pups here to find homes.

“These puppies are coming through a rescue in Manitoba called Norway House Animal Rescue,” explains David Harding with Freedom Dog Rescue, “They are going to the sites where these dogs are rescued from and finding dogs in need and then through other organizations are sending them to other locations in Canada.”

Freedom Dog Rescue has been around for only three years and in that time, it's helped rescue more than 400 dogs.

The animal rescue organizations, including another in Ottawa-area one called “I Am Alive,” work with a group called “Flights For Hope” that helps arrange volunteers to accompany the animals on planes.

The six puppies are being fostered for now by Michael Rowland who brings them to work each day at a retirement home in Almonte.

“I work at Orchardview by the Mississippi,” says Rowland, “and I bring them in so the residents can have their puppy time, too and they've just flooded my office coming in to see them all.”

There is a process for adopting the puppies and so far 4 families have come forward expressing interest. Just one little guy named Dave is still waiting for a home.

The Leroux's are already thinking ahead to their next trip to Winnipeg and the next batch of puppies they can help.

“They're always looking for volunteers,” says Stephany Leroux, the kids’ mother, “and we're also thinking if we go away to Cuba on vacation, there are other rescues looking to bring animals in but we're absolutely going to keep doing it, for sure.”

Bringing the puppies home was the easy part; saying goodbye will be the toughest.