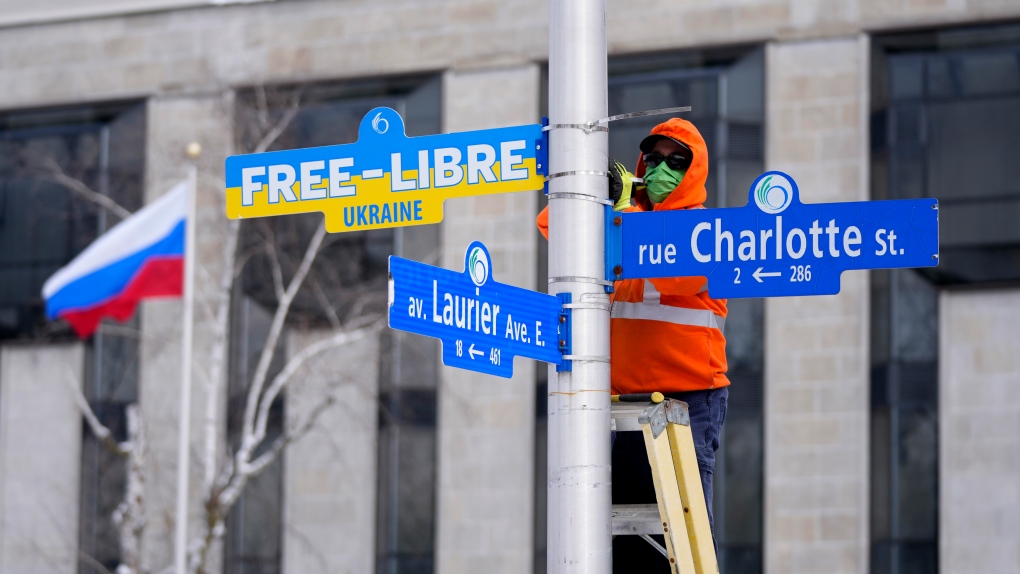 Street signs calling for a free Ukraine as a gesture of solidarity from the City of Ottawa are installed on posts along Charlotte Street in front of the Embassy of Russia in Ottawa, as Russia continues its invasion of Ukraine, on Wednesday, March 2, 2022. (Justin Tang/THE CANADIAN PRESS)

The city of Ottawa is installing new "Free Ukraine" street signs in front of the Russian Embassy in Sandy Hill to protest Russia’s military invasion of Ukraine.

Mayor Jim Watson unveiled the new "Free-Libre Ukraine" blue and yellow sign blades Wednesday morning that will be installed on Charlotte Street. Watson was joined by Coun. Mathieu Fleury and Ukrainian Charge D'Affaires, Andrii Bukvych to unveil the new signs across the street from the embassy.

The mayor says the signs are being installed in front of the Russian Embassy to "denounce their government's actions and to stand with the people of Ukraine."

Watson says the signs will send a clear message.

"Small symbol of defiance that every single day a Russian employee goes into work, they will be reminded with these signs looking down on them that they are engaged in war crimes and an illegal war," Watson said.

The mayor has also sent a letter to Immigration Minister Sean Fraser offering to work with the federal government to identify resources and opportunities to welcome Ukrainians to Ottawa.

In the letter, Watson notes Ottawa is a "vibrant caring city" that has opened its arms to multiple waves of refugees from other countries facing "political adversity, religious persecution and natural disasters."

"Residents of Ottawa are utterly heartbroken at the events unfolding in Ukraine and at the immensely difficult situation facing those who are fleeing their beloved homeland," Watson wrote.

"If the city of Ottawa can be of any assistance, please know that we want to help in a constructive way."

Several cultural and heritage institutions in Ottawa are showing solidarity with the Ukrainian people.

Heat warnings still in place for several provinces across the country

A state of emergency remains in place for central Newfoundland, as well as a provincewide outdoor fire ban, as a long-burning forest fire continues to grow.

Masks will not be mandatory in Ontario schools next semester

Students in Ontario schools will not be required to wear masks come the fall semester, the Ministry of Education confirmed Monday.

China said Monday it was extending threatening military exercises surrounding Taiwan that have disrupted shipping and air traffic and substantially raised concerns about the potential for conflict in a region crucial to global trade.

For millennial and gen Z Canadians, owning a home in this real estate market might seem like a pipe dream. In an exclusive column for CTVNews,ca personal finance contributor Christopher Liew offers some strategies to consider if you can’t afford the housing market yet.