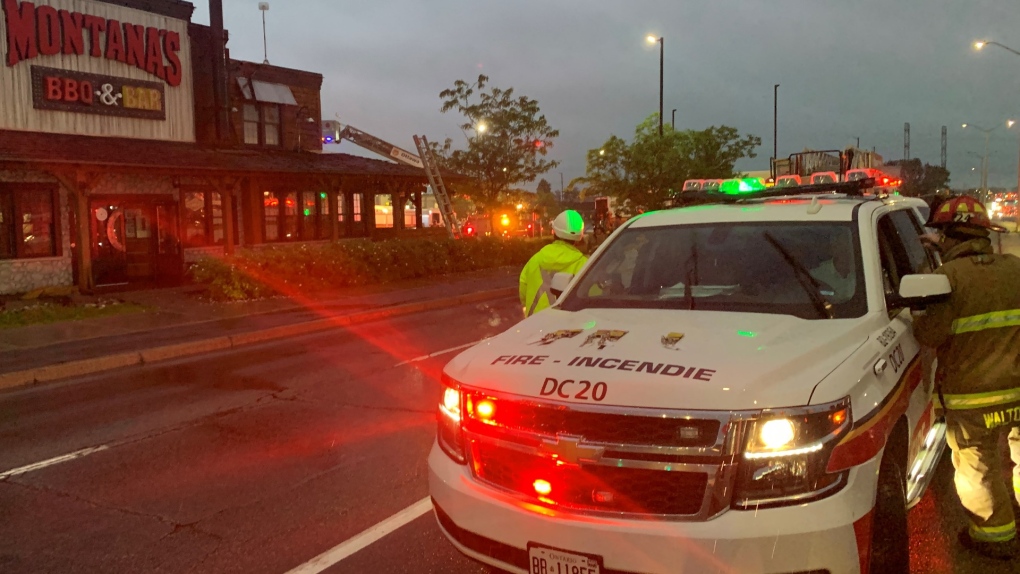 Ottawa firefighters at the scene of a fire at the Montana's restaurant on Merivale Road. June 7, 2022. (Jackie Perez/CTV News Ottawa)

Ottawa firefighters have doused a fire at a restaurant on Merivale Road.

Firefighters were called to Merivale north of Viewmount Drive at 7:45 p.m. Tuesday on reports of flames visible on the roof of the Montana’s restaurant.

Fire crews arrived within three minutes and began fighting the fire. Police closed Merivale Road in both directions between Viewmount and Family Brown Lane, which gave space for crews to set up an attack from above, Ottawa Fire Services spokesperson Nick DeFazio told CTV News. The road has since reopened.

The restaurant was evacuated and firefighters confirmed no one was still inside. There are no reported injuries.

OFS said in a tweet that firefighters prevented the fire that started on the roof from entering the interior of the restaurant, and crews were working to protect the interior from water damage. The fire was under control by 8:17 p.m.

A fire investigator has been sent to the scene to determine what caused the fire.

Due to a quick response, combined with a fast attack, @OttFire Firefighters were able to prevent the fire from spreading to the interior of the restaurant. #OttNews pic.twitter.com/zjDgHZL8dL