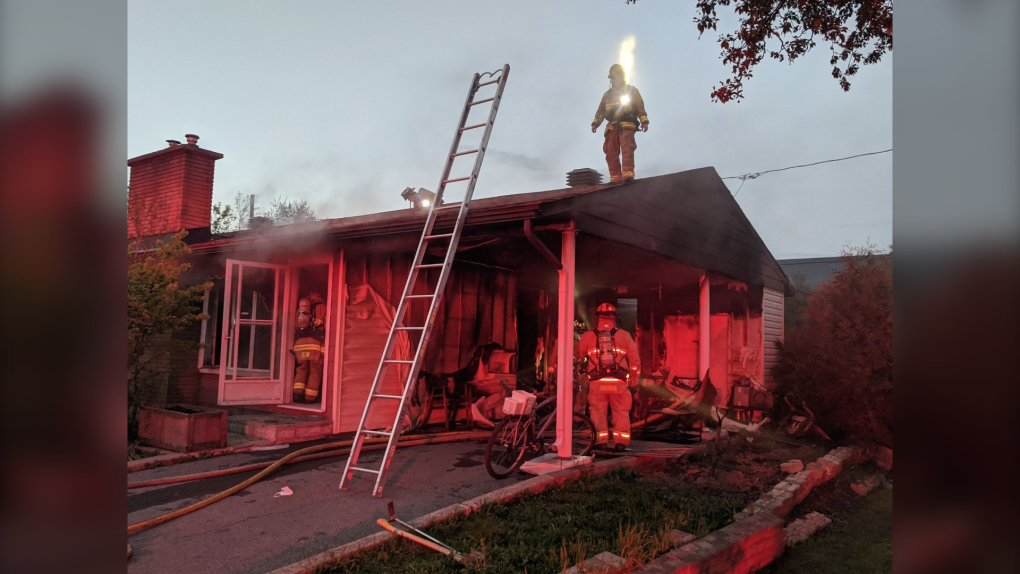 Ottawa firefighters responded to a fire in a home on Avenue U Thursday night, one of three fires in a span of three hours. (Photo courtesy: Twitter/OFSFirePhoto)

OTTAWA -- Two cats died in an apartment fire in Ottawa's Pineview neighbourhood Thursday afternoon, one of three fires firefighters responded to in a span of three hours.

Just before 5 p.m., Ottawa Fire received a 911 call from a resident reporting a kitchen fire on Appleton Drive, between Meadowbrook Road and Beaverpond Drive.

The kitchen fire was located in a unit on the fourth floor of the four storey residential building.

The fire damage was limited to the unit. One person has been displaced.

Ottawa Fire on scene of a Working Fire on Appleton Drive off Meadowbrook in Pineview. Fire has been contained to one unit on the top floor of a 4-storey apartment building. No injuries reported. #ottnews #OttFire #OttCity pic.twitter.com/lTWFJXyQqs

At 7:25 p.m., firefighters responded to multiple 911 calls for smoke in a high-rise unit on McLeod Street at Cartier Street.

Firefighters were able to quickly extinguish the fire in a seventh floor unit, and rescued a pet dog from the unit. The dog was reunited with its owner outside the building.

One person was treated by paramedics on scene and transported to hospital.

Ottawa Faire.on scene of a Working Fire on McLeod ST at Cartier ST in Centretown. Fire is in an apartment on the 7th floor of 14-storey residential highrise. Occupant safely evacuated and firefighters rescued a dog from the unit. #ottnews #OttFire #OttCity pic.twitter.com/H4FtPjCYBX

Firefighters then responded to a call from a resident reporting smoke coming from a single-storey detached bungalow on Avenue U off Tremblay Road.

Ottawa Fire says the fire started in the kitchen, blew through a window and extended to an attached carport.

Ottawa Fire on scene of a Working Fire on Avenue U off Tremblay RD. On arrival crews reported heavy smoke and flames.from a 1-storey single family home. Fire is now under control and the resident safely evacuated. #ottnews #OttFire #OttCity pic.twitter.com/ts7wRRTPvf