The city councillor who represents the Mooney’s Bay area is speaking out after city staff decided to install fencing this winter to prevent people from sledding at Mooney’s Bay Park.

The decision came nearly a year after an 11-year-old girl died in a tobogganing accident on the hill at Mooney’s Bay.

Coun. Riley Brockington, however, says he was disappointed by the decision.

“I am very disappointed to read this memo, sent to the corporation and Council as a whole, without first reviewing it with me, the local Councillor,” he wrote in a response to City Manager Steve Kanellakos and Recreation, Cultural and Facility Services general manager Dan Chenier.

The memo, released Friday, said a municipal risk assessment found no area of the hill was safe for sledding, and the city would be installing “robust temporary fencing” to keep people off it in the winter. Fencing off Mooney's Bay was among a 10-point list of recommendations aimed at minimizing the chances of another fatal accident and improving the city's sledding hill program.

But Brockington was critical of the city's response, saying staff took no responsibility for last year's fatal accident.

“The tragedy at Mooney’s Bay last December 27 that took the life of 11-year old Josée Abi Assal was completely preventable,” he wrote. “City of Ottawa negligence caused this death.” (emphasis in original)

Brockington noted in a phone call to CTV News that Abi Assal hit a post that city crews had forgotten to remove that winter.

“Through-out your memo you have taken no responsibility for this death and instead paint the Hill as a public recreational amenity so dangerous that it must be closed and boarded up until the end of time,” he wrote in his response.

Brockington said he is strongly opposed to closing the hill to sledding and noted that Mooney’s Bay is visited by many new Canadians and by those with limited means, who enjoy what the park offers year-round. Brocking also previously called for a safety review of the hill following last year's tragic accident.

He said he accepts that sledding comes with risks, but argued the city’s role is to mitigate those risks.

“I also accept that Mooney’s Bay Hill has risks around it that add to potential issues for sledders. Many of these can be addressed if a comprehensive plan is developed to permit sledding on one or some angles from the hill’s summit and not an absolute ban and closure. Mooney’s Bay Hill needs to remain open for public use in all four seasons,” he wrote.

Last winter, city crews installed hay bales around lamp posts and removed some of the metal poles from the bottom of the hill in an effort to improve safety, though officials stressed the hill was still unsafe and continued to discourage people from using it for tobogganing. 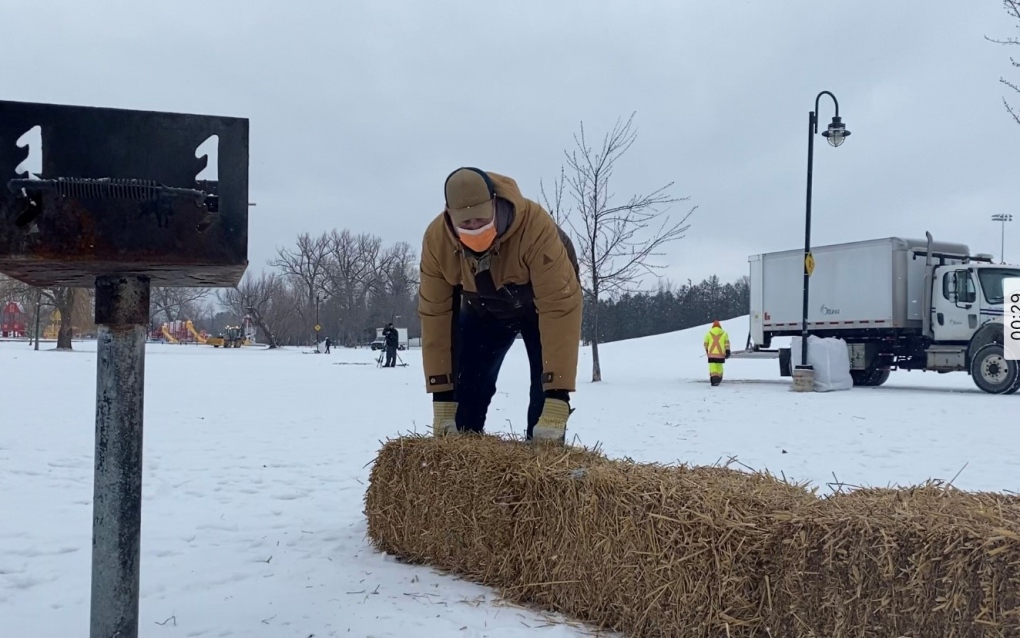 City officials are placing bales of hay around lamps and other hard metal posts at Mooney's Bay hill Dec. 28, 2021, following a fatal sledding accident. Crews were also removing most of the thin metal signage from the area. (Colton Praill/CTV News Ottawa)

Speaking to CTV News Ottawa, Brockington said toboganning has been part of Mooney's Bay for decades.

“It's free, it's outside, it's physical; it's everything I believe our city parks should offer. Closing the hill is not on for me,” he said.

The hill has not been an approved sledding hill since 2017, but has remained a popular destination regardless. Brockington says instead of a ban, the city should be looking at ways to make it safer for tobogganers.

“As to your action item list, I draw your attention to Item 6: conduct annual inspections for all approved hills. City hills that are not officially sanctioned but known to be well visited by the public should also be inspected,” he wrote. “This matter needs greater attention.”

He believes all sledding hills should have signage that inform users of the risks and things like rocks and trees can be wrapped and padded if they pose an issue, but there are also ways the city can change the landscape to make sledding safer. He added that he has heard from residents, including  Abi Assal's family, who say they want to keep the hill open.

“It's going to take a motion at council,” Brockington said. “They dropped this memo yesterday, so I need some advice and I don't have anything written yet, but it is my strong desire to see tobogganing at Mooney's Bay Park.”

On Tuesday in Ottawa, Canada's 13 premiers and Prime Minister Justin Trudeau will sit around the same table in person for the first time since COVID-19 hoping to find a path toward a new long-term health-care funding deal.