OTTAWA -- An Ottawa city councillor who was recorded on a virtual committee meeting driving while distracted says he has voluntarily gone to the police to give a statement and pay a fine.

During an audit committee meeting on Zoom Tuesday, Osgoode ward Coun. George Darouze could be seen getting into a car and driving while in the meeting.

The video appears to show Darouze using his cell phone while driving and wearing headphones. His Zoom feed cuts out after about two minutes.

“This morning, I inadvertently texted while I was driving,” he wrote. “I apologize for this and commit to my family and residents that this won’t happen again.”

He later deleted that apology and issued a second apology on his Facebook page.

“This morning I was texting and driving. This was stupid thing to do and I should not have done this. I commit to my family and residents that this won't happen again,” he said.

On Wednesday morning, Darouze issued a statement in which he says he went to a local police station to face a fine. 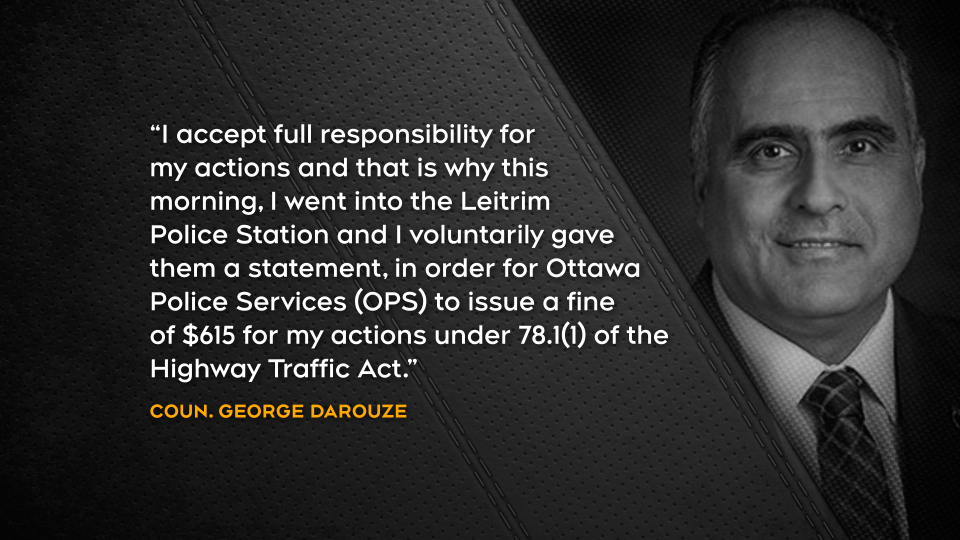 "I accept full responsibility for my actions and that is why this morning, I went into the Leitrim Police Station and I voluntarily gave them a statement, in order for Ottawa Police Services (OPS) to issue a fine of $615 for my actions under 78.1(1) of the Highway Traffic Act," Darouze said. "I promise that this will never happen again. I want to continue to be an advocate for Safer Roads Ottawa and work with OPS on their Leave the Phone Alone Initiative, and by requesting and paying this fine, I hope I and others can learn from my experience." 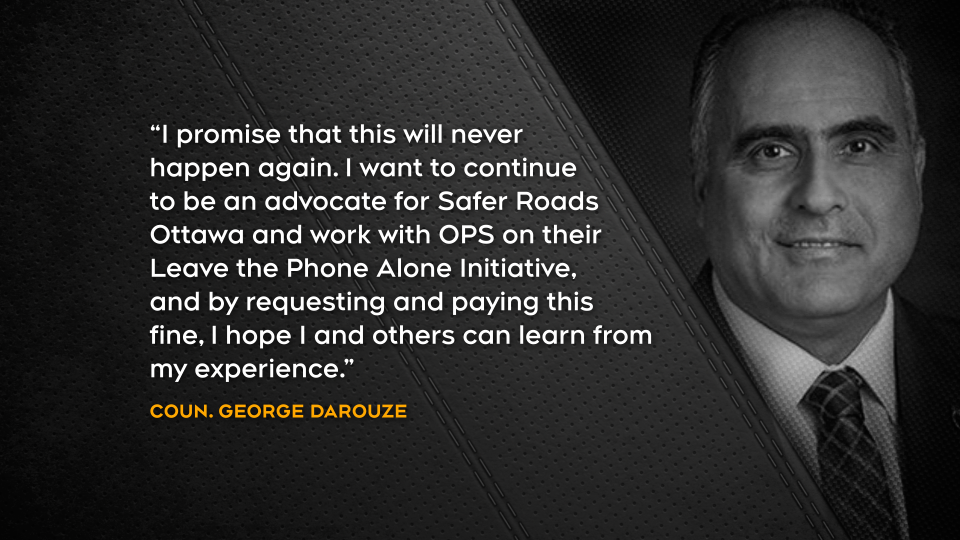 Ottawa police confirmed to CTV News that a charge was laid against Darouze under the Highway Traffic Act and that he was fined $615 dollars.

Ottawa police said Tuesday they are aware of the video, and said the matter would be investigated should a public complaint be received.

The Twitter user who posted the initial video confirms to CTV News that he has filed a complaint.

No one else in the meeting immediately commented—or appeared to notice—that Darouze was driving while on the video call.

Darouze’s video pops back up around 12:30 p.m., where he can be seen back in the office he in at the beginning of the meeting.

He remained on committee meeting call until the end of the meeting.

Speaking to reporters following the audit committee, chair Coun. Jean Cloutier said he did not see Darouze's screen at the time, but said that Darouze's action were inappropriate.

"Texting and driving is not appropriate anywhere, at any time, on any street anywhere in the world," he said.

A statement from Mayor Jim Watson’s office said: “Councillor Darouze has released a post on his Facebook page regarding the incident. Mayor Watson trusts he will not do this again.”

Watson said Wednesday morning on Twitter that he appreciated that Darouze recognized his error.

This morning, I received a letter from Councillor Darouze regarding yesterday’s incident. I appreciate that he acknowledged his error and voluntarily reported to the Ottawa Police Service to pay the fine for his actions.

Attached is his statement: pic.twitter.com/S7kZG6cd9y