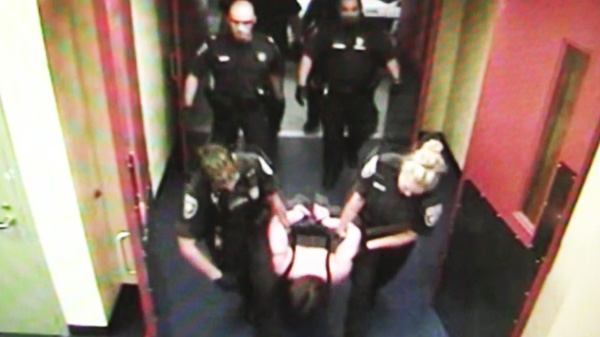 Ottawa police hold Roxanne Carr in this image taken from a 2008 video. A cellblock video has been released that captures the arrest of a woman who claims Ottawa police injured and strip-searched her before leaving her naked in a cell without medical attention.

TORONTO -- A woman brutalized by Ottawa police during her wrongful trespassing arrest and left naked for hours in a holding cell nine years ago has been awarded $254,000 in damages.

The Superior Court award in favour of Roxanne Carr, one of the highest of its kind in Canada, comes after a nine-day trial that ended more than a year ago.

"The police actions broke my heart," Carr said in a statement through her lawyer Lawrence Greenspon. "Patience is a virtue -- sometimes it's worth the wait because it helps others."

Given the possibility of an appeal, Carr would not otherwise be speaking publicly, Greenspon said Monday from Ottawa.

In making the award, Justice Sylvia Corthorn faulted several officers for the disturbing series of events, but aimed much of her judgment at Const. Michael Adlard, the officer who set off a chain of events in August 2008.

Adlard had no grounds to arrest Carr without a warrant for what was, at most, a landlord and tenant dispute, Corthorn found. The officer then used excessive force to detain her, leaving her with injuries that included a bone fracture in her wrist, the judge said.

Court records show Carr, then in her late 20s, was renting part of a home in Ottawa from her boyfriend but he had called police to say he wanted her gone. Carr was sitting and chatting with a friend on the front steps of the house when, to her surprise, Adlard showed up.

Within eight minutes, Adlard had thrown Carr to the ground and arrested her. Corthorn rejected his shifting account that he feared Carr, whose rent was paid up and was entitled to be there, was about to lunge at him.

"Adlard's failure to take a measured approach and his decision to take a forceful, if not confrontational approach are such that his conduct fell below the standard of care," Corthorn said.

The situation turned uglier when Carr kicked out the back window of the cruiser and she was taken to the police station.

Video shows officers casually search Carr, who was lying face down on the floor. Despite the fact she was now completely compliant, Const. Richard Marcil opted to use a restraining device to take her to her cell, apparently breaking her wrist in the process.

"It looks like an animal on a leash. It's really, really disturbing," Greenspon said from Ottawa on Monday. "You wouldn't treat an animal the way she was treated at the station."

Once in a cell, Marcil and other officers stripped her of her clothing on the pretext that Carr, who by now had two broken bones in her wrist, was suicidal and had tried to tie her shirt around her neck, the judge found. Carr was left for more than two hours naked in the cell.

Officers finally gave her back her clothes and allowed her to leave. The judge accepted that Carr had two fractures in her wrist, and scrapes and bruises on her head, shoulders legs and foot as a result of the force used against her and that the incident had inflicted traumatic stress on her.

Four charges against Carr, including that she had resisted arrest and assaulted an officer, were withdrawn three years later. Corthorn rejected Carr's negligence claims against the officer who had laid the charges for lack of evidence.

Ultimately, Corthorn awarded her $90,000 in general damages, $120,000 in lost income and $37,000 for counselling. Corthorn also ordered the police services board and the four officers involved in stripping Carr and leaving her naked in the cell to pay her another $7,500 for breaching her rights.

Interest and legal costs have yet to be determined.

Ottawa police said Monday they were reviewing the judgment and would not discuss the case or the status of the eight officers involved, who never faced prosecution or misconduct charges.

"It certainly puts the propriety of their investigations up for grabs," Greenspon said.