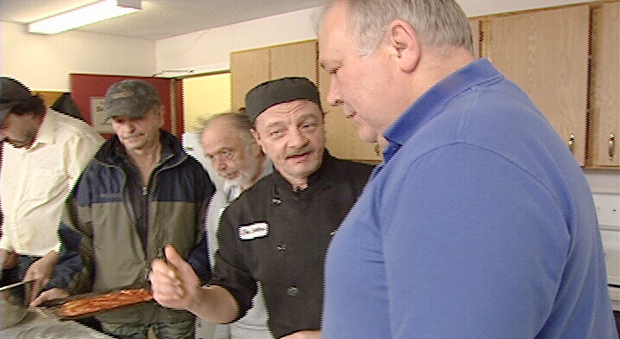 An Ottawa chef is teaching low income men how to make nutritious meals with food from the Food Bank.

Robert Lahaie knows firsthand how hard that can be. He's been there.  Now, he’s helped start a unique program that is filling bellies and warming souls.  Every second Wednesday, about a dozen guys gather at a kitchen in Ottawa's Caldwell area to learn how to cook.  They've got little money and meagre offerings from a food bank but they're turning out some dazzling dishes thanks to Ottawa chef Robert Lahaie. Lahaie understands these guys.  He used to be one of them.

"I had a lot of problems going on with my life,” says Lahaie, “alcohol, drug problems. At one point I hit rock bottom.”

That's when he went to the Caldwell Food Bank.

“I had tears in my eyes.  I was really feeling down. I had never been to a food bank or a family center to ask for help from anyone for anything.  And my buddy Maurice came over.”

Maurice Courchesne runs the food bank.  He befriended Lahaie, who went on to chef school and landed a great job working as a chef at Ottawa’s Da Santino Restaurant.  But every other Wednesday, he volunteers here in the kitchen in the Caldwell area offering tips on how to turn groceries from the food bank into beautiful meals from lasagna to chicken cacciatore to home-made pizza, which is on the menu today.

“You guys, you know if you want to make your own pizza dough,” he says as he speaks around the table to a group of ten men, “all you need is yeast, water and flour.”

For some of the men, this is all a totally new concept.

"I’m impressed,” says Larry Bourgeois, “first time here, the pizza. The camaraderie is what I like about this neighborhood thing.”

For other, they are a little more experimental.  Graham Winter tosses the pizza dough in the air as he speaks with CTV, “The biggest thing I’ve learned is how to use the ingredients from the food bank and incorporate them into the meal plan.”

We meet together,” says Maurice Courchesne, the manager of the Caldwell Food Bank, “we talk together, and we spend the afternoon together.  It’s good for them.”

It’s almost like a family; something many of the men don’t have.

"It's fun to hang out here, says Jason Middleton, “gets me out of the house every two weeks.”

“And you get fed,” adds reporter Joanne Schnurr. “Well that too,” he laughs.

The program, called Men Can Cook, runs every other Wednesday at the Caldwell Centre.  Following the success of THIS program, there's now one for women, on the alternate Wednesdays, called of course Women Can Cook. And never to miss an opportunity to help his guys, Robert Lahaie had a request for anyone with some good quality chef knives to donate to his cooking program.