OTTAWA -- The liquor licences of the Senate Sports Tavern and Senate South are suspended after the Alcohol and Gaming Commission of Ontario (AGCO) says the owner allegedly assaulted an Ottawa police officer during a COVID-19 compliance inspection last weekend.

In a statement, the Ontario agency responsible for regulating the alcohol sector says the AGCO Registrar issued orders to suspend the liquor licences for the Senate Sports Tavern in the ByWard Market and Senate South on Bank Street immediately, "for reasons of public interest and safety."

The AGCO adds the Registrar also issued "Notices of Proposal" to revoke the establishments' liquor licences for an infraction of the Liquor Licence Act.

An Ottawa police officer visited the Senate Sports Tavern at 33 Clarence Street on Nov. 29 to ensure the establishment was complying with the Reopening Ontario Act (ROA) during the COVID-19 pandemic. The AGCO said during the inspection, the officer observed a group of people entering the premise shortly after 10 p.m.

"The officer attempted to enter the licensed premises to conduct an inspection under the ROA and was allegedly assaulted by an owner of the business," said the AGCO.

"This individual was arrested and charged with offences including assault on police and possession of illegal narcotics. He was also charged with obstructing the inspection under the Reopening Ontario Act."

In a statement to CTV News Ottawa on Saturday afternoon, Steve Ryan of The Senate Tavern says he is "saddened and frustrated by this incident."

"For close to a week now, I’ve been stirring with frustration over an incident that took place at one of my restaurants this past Sunday. I’ve grappled with the idea of telling my story, but in light of the information that has recently been published I feel I need to make a statement," said Ryan.

Ryan says he went to the Senate Sports Tavern in the ByWard Market on Sunday to ensure the staff was able to get people out by the 10 p.m. closing time.

"I was helping to clear out my restaurant in line with the 10 p.m. curfew when an officer arrived at the door. When I went to speak with him, he aggressively pushed past me. And when I protested, he assaulted me," writes Ryan in the statement.

"I take the restrictions around COVID-19 very seriously. My business partners and I have gone to great lengths to create and maintain a safe environment for our staff and customers. And we have always honoured the city's pandemic-related restrictions."

Ryan adds, "Much of the information that has recently been made public is inaccurate. I look forward to the opportunity to address the charges against me and my business in court."

CTV News Ottawa reached out to Ottawa police for comment on the investigation Saturday afternoon, but nobody was available. 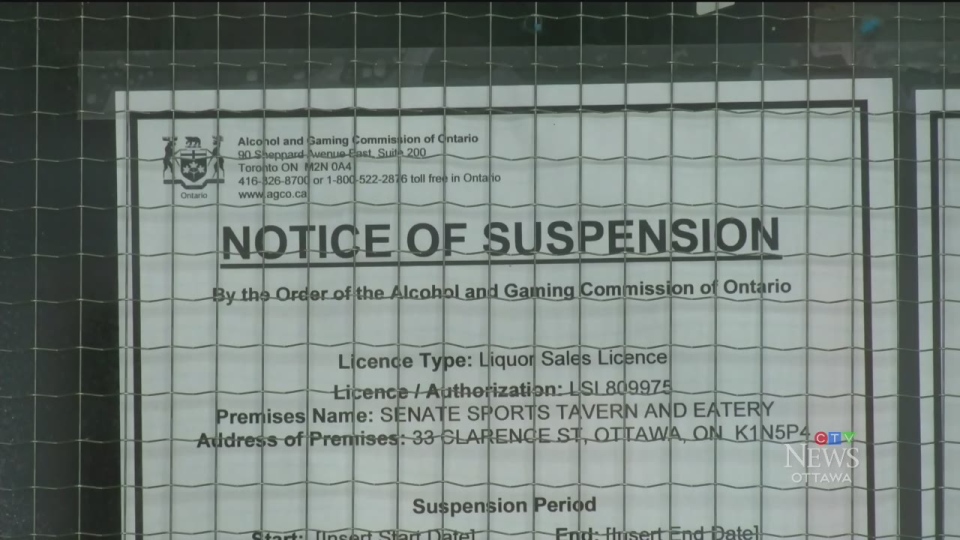 Ottawa is in the "orange-restrict" level of Ontario's COVID-19 colour-coded restriction system. In the "restrict" level, bars and restaurants must stop serving alcohol at 9 p.m. and close at 10 p.m.

In a statement to CTV News Ottawa, Mayor Jim Watson said he appreciated the work of Ottawa police and the Alcohol and Gaming Commission of Ontario.

"The actions by this bar are completely reprehensible and irresponsible, putting both employees and customers at risk. If we are to continue to flatten the curve in Ottawa, these breaches of the law must stop. I appreciate the work of our law enforcement agencies that shut down this establishment," said a statement from the Mayor's Office on Saturday.

An establishment has the right to appeal the Registrar's proposal to revoke the liquor licences to the Licence Appeal Tribunal.

"Those who hold a licence to sell alcohol are responsible for meeting their obligations under the (Liquor Licence Act), and to act with honesty and integrity," said the Alcohol and Gaming Commission of Ontario.

"There are serious consequences for licence holders who do not meet these requirements, including the possibility of an order of monetary penalty, a temporary suspension of the licence, or in the most serious cases a revocation of the licence."

None of the allegations by the Alcohol and Gaming Commission of Ontario have been tested or proven in court.

A post shared by The Senate On Clarence (@senateclarence)