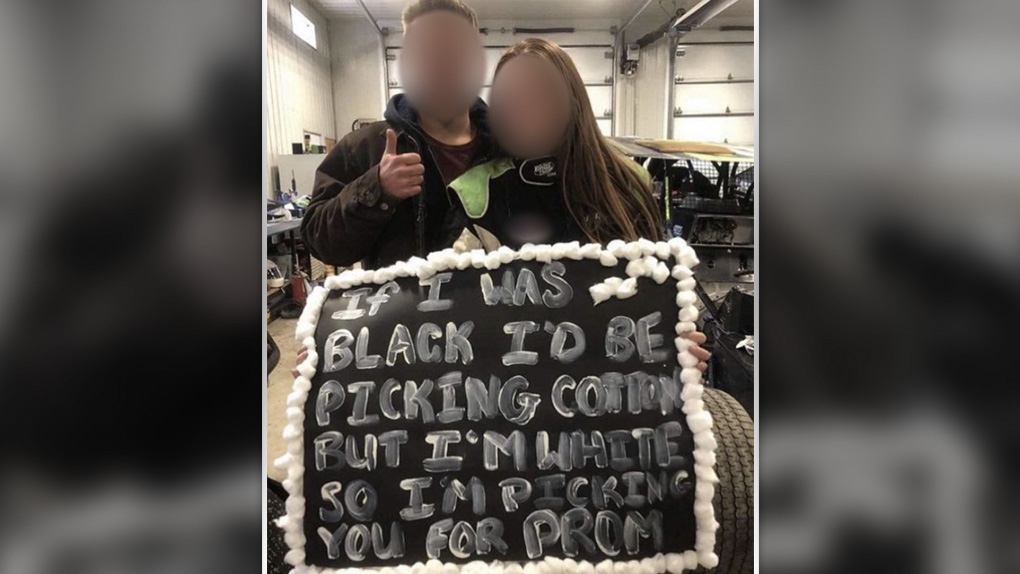 OTTAWA -- A racist 'promposal' in the Kemptville area has sparked a school board investigation, and an apology from the young woman who created a sign that referenced black people picking cotton.

A high school student in the area, asked her boyfriend to the prom, and posted a picture of a cardboard sign to a group chat which was later shared on social media.

The sign reads: “If I was black I’d be picking cotton but I’m white so I’m picking you for prom.” Dozens of cotton balls had been glued to the edge of the black sign, with the young woman’s boyfriend giving a thumbs up.

Students of St. Michael's Catholic High School have expressed outrage and shock at the photo.

"Seeing all the time that was put into the poster, with all the cotton," said student Filani Olotu.

"It was just mind-blowing."

"She thought it was okay, and it's not," said another student Hayden Brady.

Parents of students at the school too are condemning the sign.

"I was horrified, I was absolutely horrified," said parent Janice Maes.

"I can't even comprehend how you can have that thought in your head and think, 'this is okay'."

CTV Ottawa is not identifying the students involved, because of their age and their safety.

The teenagers sent CTV an apology after the picture was shared on the internet.

“We would like everyone to know that we’re very sorry for our actions in taking a picture with the inappropriate sign. We recognize that this act was wrong.  This was a mistake that was made and we both feel incredibly bad about it. We apologize to anyone that it has offended and feel deeply and truly sorry for our actions.  We hope to be able to move on from this in our lives.”

The school board issued a statement, after the picture was shared widely on social media.

“St. Michael Catholic High School, like all schools in the Catholic District School Board of Eastern Ontario, does not support, tolerate or condone any act of racism. Please know that the school is actively responding to this unfortunate incident, and the school board has policies, procedures and programs in place which layout a definitive course of action in such situations.”

Meanwhile, community activists say the sign may be small but it will have large and lasting impacts on the community.

"It's an egregious expression of hatred," Rev. Anthony Bailey, the pastor of Parkdale United Church.

"It is hurting human beings and its causing a corrosive effect within our society."