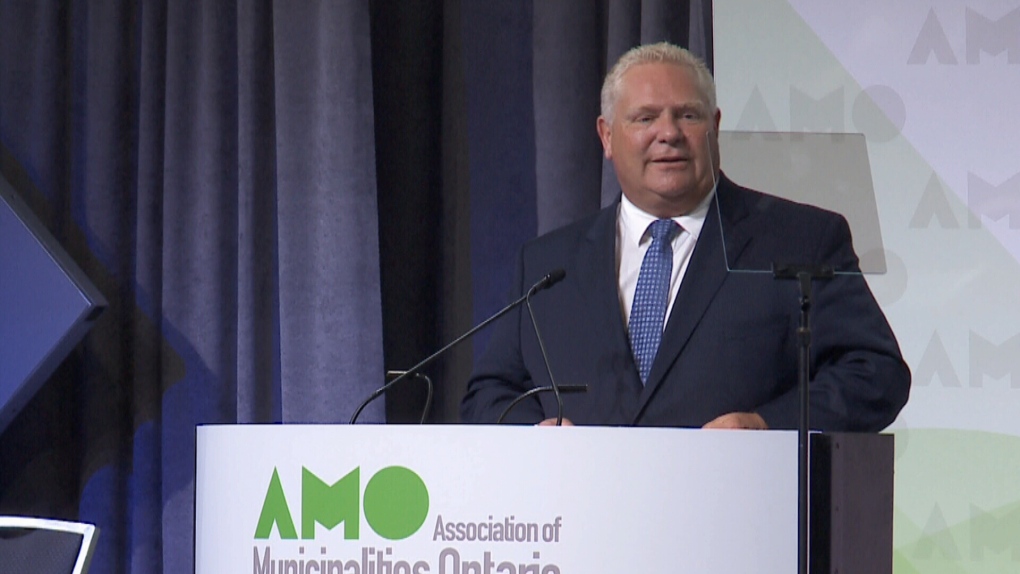 Ontario's Premier said today his government will move ahead with its funding cuts to child care and public health next year.

Doug Ford was in Ottawa speaking to municipal leaders from across the province.

These funding cuts will hurt some municipalities, including Ottawa, hard.  Premier Ford has promised some transition funding to help ease that pain.

But several mayors who spoke with CTV today aren't sure whether this will be a band aid solution or an interim cure.

“My friends, I’m so happy to be here today,” Premier Doug Ford told a packed room at the Ottawa Shaw Centre for the annual meeting of the Association of Municipalities of Ontario (AMO).

Ford may consider himself among friends but his relationship with Ontario municipalities has been fractious at best.

His government's decision earlier this year to retroactively cut funding to child care and public health didn't go over very well since municipalities had already planned their budgets.  Today, he announced those cuts are coming but with a softer blow.

“My friends, we're listening to you,” he said, “Today, I’m announcing that we are providing transitional funding for your budgeting process in 2020.”

While Ford provided few details on the transitional funding, sources in the Premier’s office said the province is trying to limit the financial hit to municipalities, especially when it comes to public health. The government will standardize the cost sharing arrangement of local public health units; the province will pay 70 per cent starting in 2020, while municipalities will carry 30 per cent of the burden. Currently, the city of Ottawa carries 25% of the burden while the province picks up the other 75%.

Health Minister Christine Elliott told delegates to the AMO today that if costs borne by the municipalities were to rise by more than 10 per cent, the province would provide funding to offset the additional amount.

Municipalities aren't quite sure what that means in dollar terms.  In Ottawa, for instance, provincial funding cuts to child care will amount to about $6 million dollars and nearly a million dollars to long term care funding.  Ottawa's mayor says it is unclear how much transitional funding this city will receive.

“As always, the devil is in the details,” Mayor Watson said at the AMO, after a one-on-one meeting with the Premier, “We don’t know how much we will get but I said we need to know what the numbers will be in next few weeks because we are putting our budgets together.”

“What I heard this morning,” said Interim Liberal Leader John Fraser, “was that the cuts aren't coming right away but the cuts are coming.”

Guy Desjardins is the municipality’s mayor, “They were talking about cutting twenty percent that’s given by the province.  Twenty percent is big hike; we can't absorb, so we would have to put it on the daycare, which would be expensive for parents.”

These funding concerns remain top of mind for municipalities who are limited in their ability to raise revenue.  Their only option is to either raise taxes or cut services.

But in an interview this morning with NEWSTALK 580 CFRA'S Bill Carroll, the Premier said he's confident that won't happen.

Jim Watson points out that unlike the federal or provincial governments, municipalities can't run deficits.  If there's a funding shortfall, their choices are limited.