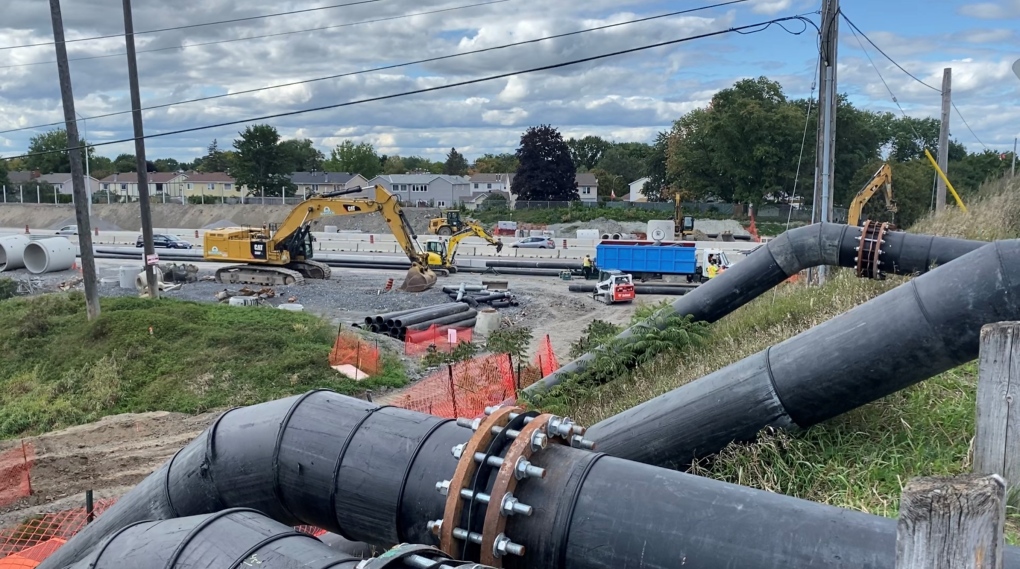 OTTAWA -- Something smells in Orleans and the neighbours say it’s the diverted sewage pipes from the nearby LRT construction sight that’s creating an unbearable backyard stench.

Residents who live on Saint Jovit Ridge say the noxious odour has been hovering around their homes for most of the summer and Leroy Keech, suspects the culprit is in the culvert behind his home.

“I think this is a sewage pipe that got installed when they were doing construction on LRT,” says Keech, pointing to a large red hose travelling through the bushes and going into sewer. “Some say its water but the smell would tell you something else … You know it’s pungent and you can’t stay out outside and you have to close the windows in the house.”

The hose was not dumping water into the sewer on Monday, but Keech’s wife, Colleen O’Sullivan, has been in her backyard when it has, and it overflowed.

“I was just here working the garden pulling some weeds andI heard this water gushing sound,” says O’Sullivan. “I got my husband and he went up to the construction guys to say there’s a problem … so they contacted somebody, it was going all the way down the whole backyard.”

O’Sullivan says it smelled like an open septic tank.

The couple’s home, along with many others on the street, back onto Orleans Boulevard, next to the highway 174 overpass, where stage two of the LRT build is underway. There are nine large black pipes, running across the bridge, that are temporarily diverting storm and waste water in order to update infrastructure along the new rail path.

City crews have investigated the smelly complaints and in a statement from Michael Morgan, Director, Rail Construction Program for the city of Ottawa, says;

“A weighted tarp has been installed to contain any odours within the sanitary sewer by-pass. Monitoring equipment and staff have confirmed that this mitigation measure is working to help reduce the presence of odours. Staff will continue to monitor the situation until the temporary by-pass is removed next week.”

However Keech says on Sunday night, the stench was ‘unbelievable’.

Neighbour Carla De Koning, whose home backs onto highway 174, and the LRT construction site, says the smell is intermittent throughout the day but happens most in the evening.”

“It lasts probably 20 minutes or something like that and then it just sort of dissipates a bit,” says De Koning. “It’s almost nauseating to the point where it permeates everything it’s in the house it’s in the basement even you smell it everywhere. It’s frustrating because you can’t even enjoy these beautiful backyards and it’s all we have now because we’re at home.”

According to the city, the bypass is expected to be in place until around Sept. 20.