KINGSTON, Ont. -- Ontario's Ministry of Labour has laid 22 charges in relation to a Kingston fire that left a construction worker in hospital with burns after a dramatic rescue by the military.

On Dec. 17, crane operator Adam Jastrzebski was stranded on top of a crane at the centre of a fire that had engulfed a five-storey apartment building under construction.

The 68-year-old, who suffered burns to his hands, legs, back and buttocks, was forced to crawl out along the boom of his crane before a military helicopter airlifted him to safety.

The blaze was so intense that surrounding buildings had their windows blown out, a duplex and a hotel were destroyed, and vehicles caught on fire, with more than 150 people forced from their homes.

The military crew which carried out the rescue knew they were dealing with an extremely precarious situation.

"I wasn't concerned with our safety, I was concerned with the crane operator himself," helicopter pilot Capt. David Agnew said at the time. "I was just imagining with being in the fire for the last couple hours that the crane could fall at any time."

Ten charges were laid against Jay Patry Enterprises Inc. as a contractor, employer and corporation, including failure to take reasonable precautions to protect the health and safety of workers.

Stelmach Property Management Inc. is charged as a corporation with two counts of failing to comply with requirements issued by a Ministry of Labour inspector.

A total of 10 charges were laid against three individuals -- Jason Patry, Nathan Patry and Troy Stelmach are all charged with the provision of false information to a Ministry of Labour inspector among other offences.

A court appearance is scheduled for Sept. 30. 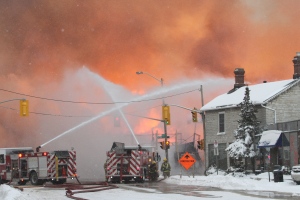