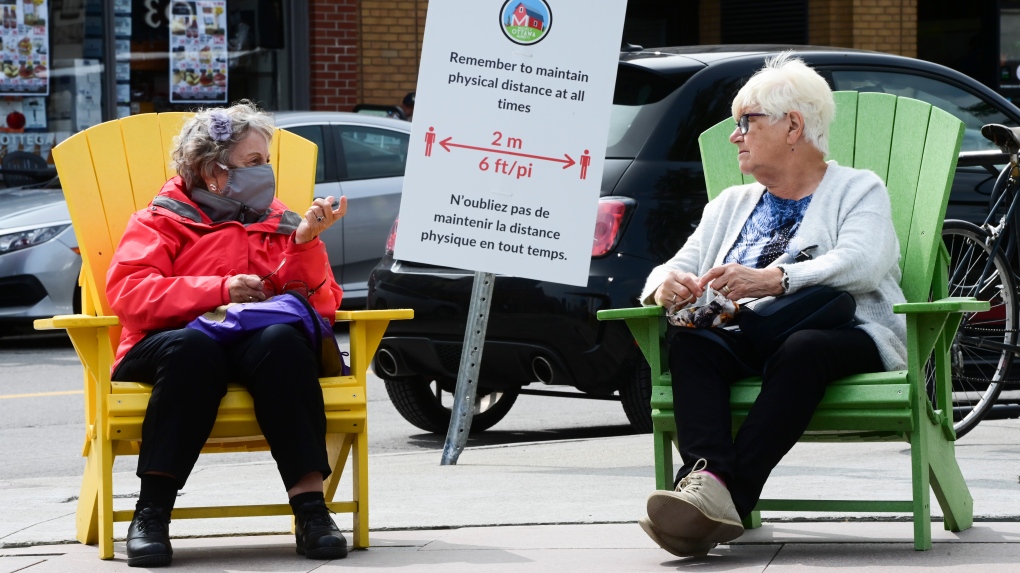 People take a rest in chairs in downtown Ottawa as a sign reminds people to physically distance during the COVID-19 pandemic in Ottawa Monday, Sept. 14, 2020. (Sean Kilpatrick/THE CANADIAN PRESS)

OTTAWA -- Social gatherings in Ottawa and eastern Ontario are now limited to a maximum of 10 people indoors and 25 people outdoors.

Two days after reducing the limits on the number of people permitted to attend private gatherings in Ottawa, the Ontario Government announced the new limits will expand to cover all areas of Ontario.

Effective immediately, the new limit of people allowed to attend an unmonitored private social gathering in Ottawa and eastern Ontario is:

Indoor and outdoor events and gatherings cannot be merged together.

Premier Doug Ford says the new limits on social gatherings come after Ontario has "seen an alarming growth in the number of COVID-19 cases in the province."

"Clearly, the numbers are heading in the wrong direction. That's why we are taking decisive action to lower the size of unmonitored private social gatherings in every region of Ontario."

The new limits do not apply to events or gatherings held in staffed businesses and facilities, including bars, restaurants, movie theatres, convention centres, banquet halls, gyms, places of worship and performing art events.

Eastern Ontario Medical Officer of Health Dr. Paul Roumeliotis told CTV News at Six on Friday that private gatherings have been driving up the case counts.

"This is a wake up to call to us. These numbers are increasing. We have to be vigilant, we have to identify where the issues are," said Dr. Roumeliotis about the start of a second wave.

"We're starting to identify them. A lot of those private gatherings particularly in the Ottawa, Toronto and Peel area, even in my area are sort of where the sources are."

Kingston looks to crackdown on gatherings

The limits on gathering sizes come after Kingston took a number of steps to limit the spread of COVID-19.

Mayor Bryan Paterson issued a new emergency order requiring physical distancing on sidewalks and streets to discourage congregating in the downtown area. Under the order, individuals in designated areas cannot gather or loiter in groups of more than 10 people.

Paterson told CTV News Ottawa the order is targeting groups gathering outside some of the bars in the city.

Kingston also increased the fines for people hosting "nuisance parties" in violation of public health protocols from $500 to $2,000.