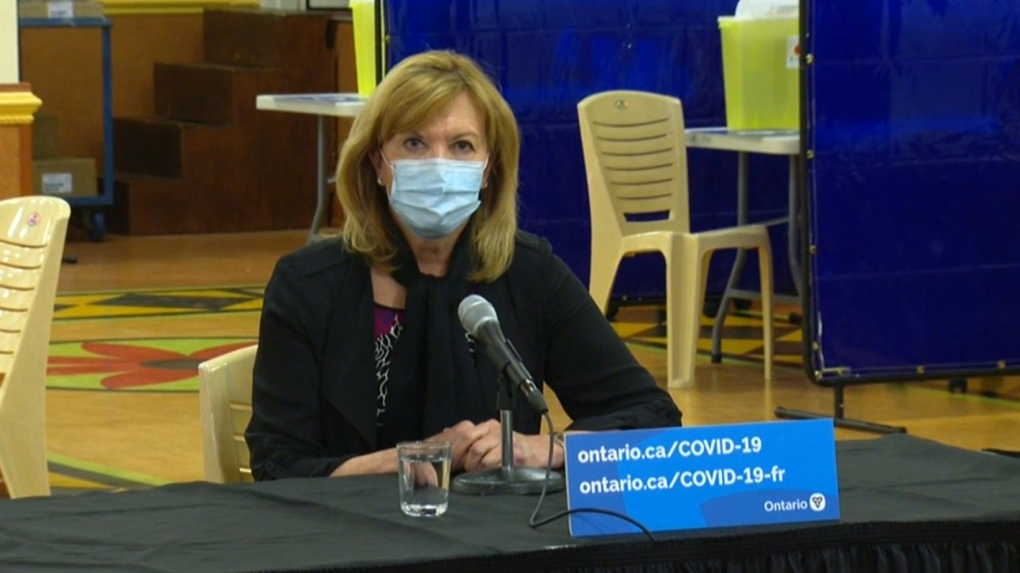 OTTAWA -- Ontario Health Minister Christine Elliott is denying politics was behind the decision to label a part of western Ottawa a COVID-19 "hot spot,” despite data showing the rate of infections in the area is lower than other parts of the city.

Elliott told reporters Tuesday that the hot spots areas were originally identified on the basis of historic data.

"In the case of the Ottawa area (K2V), we're trying to be proactive because we know there are a number of congregate settings there, in terms of retirement homes, long-term care homes, seniors' apartments and so on, where we know we need to get in there before an outbreak happens," she said.

Additionally, the province is booking vaccine appointments for anyone in Ottawa 60 years of age or older, regardless of their postal code.

Elliott stressed that the decision to identify the area as a hot spot was made based on available evidence and not on politics. The K2V FSA is within the riding of Progressive Conservative MPP Merrilee Fullerton, the Minister of Long-Term Care.

"Absolutely no political motivation whatsoever," Elliott said. "This was decided on the basis of the clinical evidence and the recommendations of Dr. (Vera) Etches, the Chief Medical Officer of Health, and the Public Health Measures Table."

Data from the non-profit research institute ICES Ontario show that the K2V FSA has seen much lower rates of COVID-19 deaths and infections compared to the other two identified hot spots and some other FSAs in Ottawa that were not named as hot spots.

Ottawa South Liberal MPP John Fraser raised the issue in Question Period on Monday, asking how K2V was chosen despite its low rate of transmission.

"A postal code region in Kanata, a riding of a government minister, is deemed a hot spot, despite lower rates of hospitalization and death than some 300 other neighbourhoods in Ontario," he said.

Elliott responded to say the government's decisions were based on transmission records and other evidence.

"Any suggestion that any postal codes were selected for any reason other than the fact that they were hot spots in experiencing high rates of transmission is beneath you," Elliott said in response. "We have been listening to the doctors, we have been watching the transmission records, and we know that those hot spots that we've identified are areas that are having high transmission. That is how the decision about the postal codes that we are selecting receive extra doses of the vaccine."

Employers in 'hot spots' can apply for vaccines

The Ontario government said in a technical briefing on Tuesday that it is working with local public health units to explore the feasibility of workplace vaccination clinics in hot spot areas.

The province says businesses that wish to host an onsite clinic must be within a hot spot area, and must have had a previous COVID-19 outbreak or be at risk of an outbreak. The employer would be responsible for setting up, operating and funding the clinic and would offer shots to workers who cannot work from home as well as people in the local community.

Employers must contact the provincial COVID-19 vaccine task force to inquire about hosting a vaccine clinic.

The Canadian Tire Centre is located in the K2V area and employers such as Lockheed Martin, the Ford Motor Company and IBM have offices there.