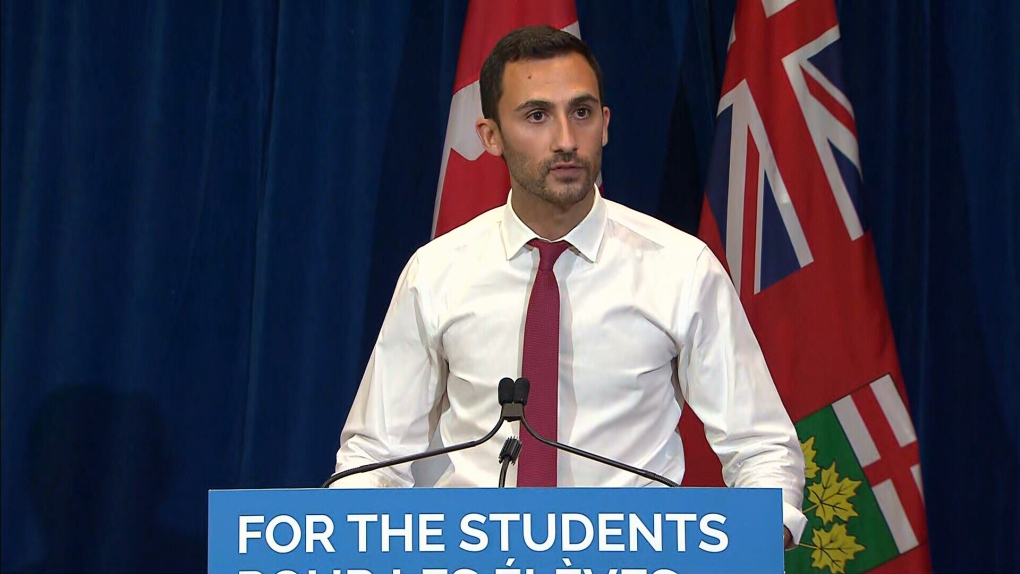 TORONTO -- Ontario Education Minister Stephen Lecce says the government will give money to parents affected by rotating teachers' strikes, with compensation for child care ranging from $25 to $60 per day of missed school.

Parents whose kids aren't yet enrolled in school but attend school-based child-care centres affected by the strikes will get the most money, while those whose children are in grades 1 through 7 will get the least. Parents of secondary school students won't get any funding, but those with children with special needs up to age 21 will get $40 per day.

Lecce says the funding is intended to “ensure students remain cared for” during the labour action.

The measure comes as the union representing Ontario's elementary teachers says it will hold a one-day strike at three school boards on Monday unless contract talks with the government progress.

The Elementary Teachers Federation of Ontario says it's given five days notice to the provincial government that workers in Toronto, York Region and Ottawa-Carleton boards will walk off the job.

It says the strike will go ahead unless government representatives “get serious” about reaching a deal by Friday.

It's the latest development in the ongoing dispute between the four major teachers' unions and the Progressive Conservative government, which have been bargaining new collective agreements since the beginning of September.

ETFO has said the key issues include supports for students with special needs, addressing violence in schools and preserving full-day kindergarten.

Elementary teachers are also seeking higher wage increases than the government has offered.

ETFO appears to be following the example of the Ontario Secondary School Teachers' Federation, which held its fifth rotating strike at schools in 16 boards on Wednesday.

OSSTF, which represents 60,000 teachers and education workers, began one-day walkouts on Dec. 4 with a job action that closed schools across the province.

Teachers were angered when the government announced that average high school class sizes would increase and four e-learning courses would be mandatory for graduation. The government has since scaled back those proposals, but OSSTF president Harvey Bischof has said it's not enough.

Lecce has repeatedly said the key sticking point in talks is compensation, with the union demanding a roughly two per cent wage increase and the government offering one per cent.

This report by The Canadian Press was first published Jan. 15, 2020