One person injured in fall during 'Faux Homecoming' celebrations in Kingston, Ont.

One person injured in fall during 'Faux Homecoming' celebrations in Kingston, Ont. 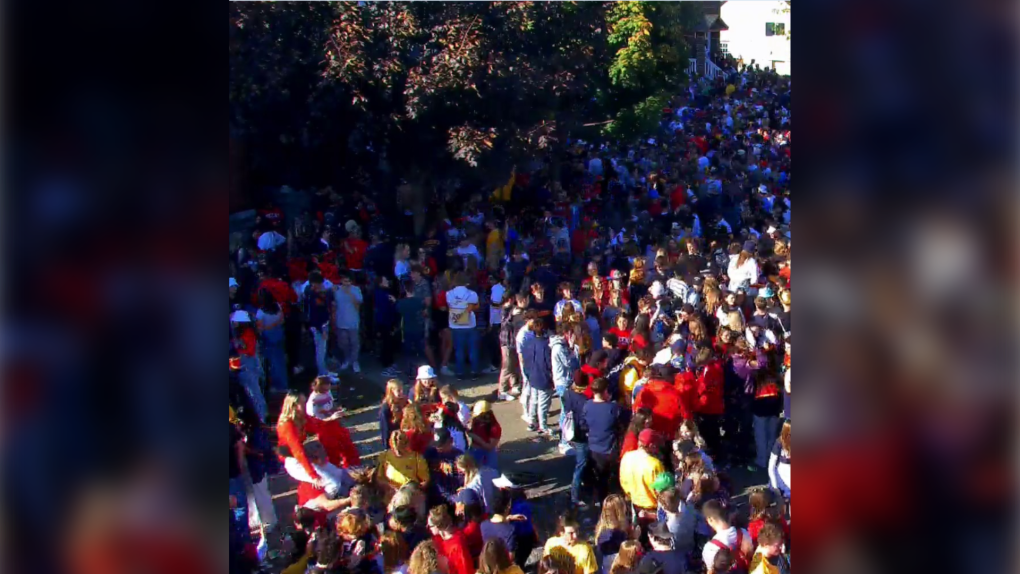 Police in Kingston, Ont. issued a number of charges and made multiple arrests, as thousands of students packed the University District for 'Faux Homecoming" festivities.

One person suffered injuries after falling off a roof on Saturday afternoon near the campus of Queen's University, and police reported projectiles were being thrown at officers on Aberdeen Street.

As night fell on the city, police and Bylaw Enforcement officers maintained a constant presence in the area, enforcing the University District Safety Initiative that includes fines of up to $2,000 for hosting unsanctioned parties and remaining in a 'nuisance party' area after police order people to leave.

Crowds began to gather in the University District shortly before lunchtime on Saturday, with police declaring several nuisance parties in the area. Several tickets worth $2,000 each were issued to people in the area by early afternoon.

Police reported one person was treated for injuries after falling off a roof on Aberdeen Street.

Just after 6 p.m., police reported it had cleared out a mass gathering on Aberdeen Street.

"As a result of the gathering a number of charges were laid and multiple arrests were made," police said on Twitter.

"Police and Kingston Bylaw will maintain a constant presence in the area throughout the evening to enforce the University District Safety Initiative and ensure the safety and well-being of our citizens."

In a second tweet, police said, "This afternoon a number of individuals were observed climbing trees and accessing rooftops in the university district. Police are urging individuals to refrain from engaging in this behavior and to prioritize their wellbeing by keeping both feet on the ground."

The first nuisance party of the day was declared on Earl Street, between Albert Street and Collingwood Street just before 12 p.m. Police lifted the declaration about 30 minutes later, and announced five fines worth $2,000 each were issued to people in the nuisance party area.

Another 'Nuisance Party" was declared on Aberdeen Street, between Johnson Street and Earl Street, just after 2 p.m., with police ordering attendees to disperse. Police said officers were "actively charging individuals under the Nuisance Bylaw", and a number of people had been charged with public intoxication.

An hour earlier, police said, "The crowd on Aberdeen Street is swelling to a size that is dangerous for all in attendance with projectiles being thrown at police who will now be containing the street."

The Nuisance Party Bylaw in Kingston provides police with the ability to address the "negative impacts on neighbourhoods of behaviours associated with large gatherings", according to the city.

A no-fly zone has also been implemented around Queen's University this weekend and next weekend.

Police say between 8 a.m. Friday and 8 a.m. Sunday, and again next weekend, no aircraft, including drones, are permitted in the University District area. Anyone violating the law face fines of up to $1,000.

The Canadian economy grew by 0.1 per cent in November as higher interest rates began to slow spending toward the end of the year.

Pakistani authorities scrambled Tuesday to determine how a suicide bomber was able to carry out one of the country's deadliest militant attacks in years, unleashing an explosion in a crowded mosque inside a highly secured police compound in the city of Peshawar. The death toll from the blast climbed to 100.

A Russian company said it will offer five million roubles (US$72,000) in cash to the first soldiers who destroy or capture western-made tanks in Ukraine, after the Kremlin vowed Russian forces would wipe out any Western tanks shipped to Ukraine.