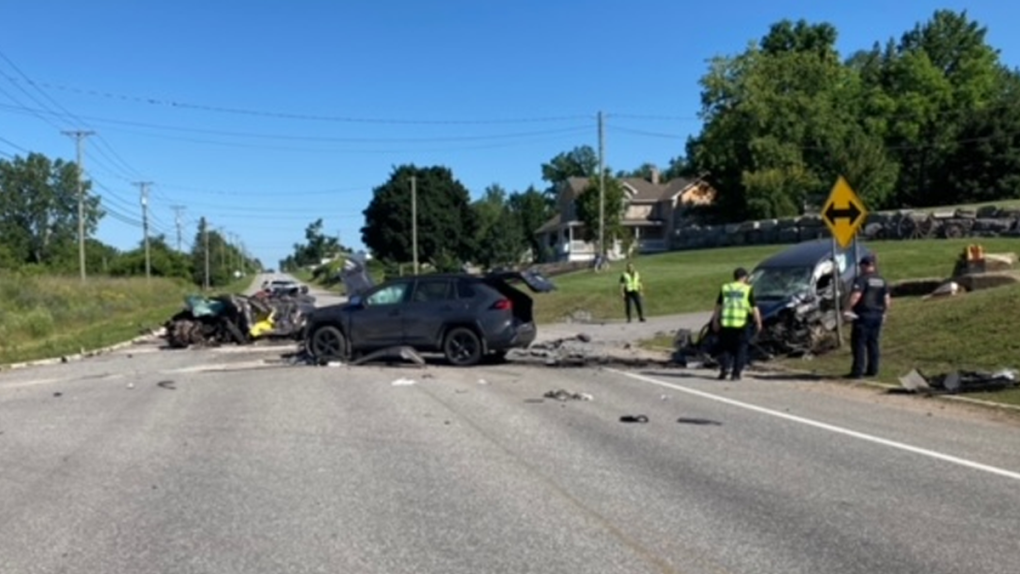 The scene of a fatal three-vehicle crash on Highway 148 west of Gatineau on Monday, July 4, 2022. (MRC des Collines-de-l'Outaouais)

One person is dead and another seriously injured after a three-vehicle crash on Highway 148 west of Gatineau.

The crash happened around 5:30 a.m. Monday at the highway intersection with Chemin McCaffrey in Luskville, near the city limits of Gatineau’s Aylmer sector.

MRC des Collines police said one person was pronounced dead in hospital and another suffered serious injuries. Their identities have not been released.

A detour is in place and the cause of the crash is under investigation.

Donald Trump invoked his Fifth Amendment protection against self-incrimination as he testified under oath Wednesday in the New York attorney general's long-running civil investigation into his business dealings, the former president said in a statement.

Is Canada's 'historic' housing correction affecting your plans to buy or sell? CTVNews.ca wants to hear from you

Following a series of interest rate hikes, Canada's housing market is now facing a 'historic' correction. CTVNews.ca wants to hear from Canadians looking to buy or sell homes in a changing market landscape.

Domino's tried to sell pizza to Italians. It failed

Seven years after its debut in Italy, the American pizza giant Dominos has formally shut its stores after it failed to win over locals who preferred homegrown options, according to a report by Milano Today.

A Little League batter rose from a beaning to console the upset pitcher in a dramatic scene at a Little League regional tournament game Tuesday in Waco, Texas.