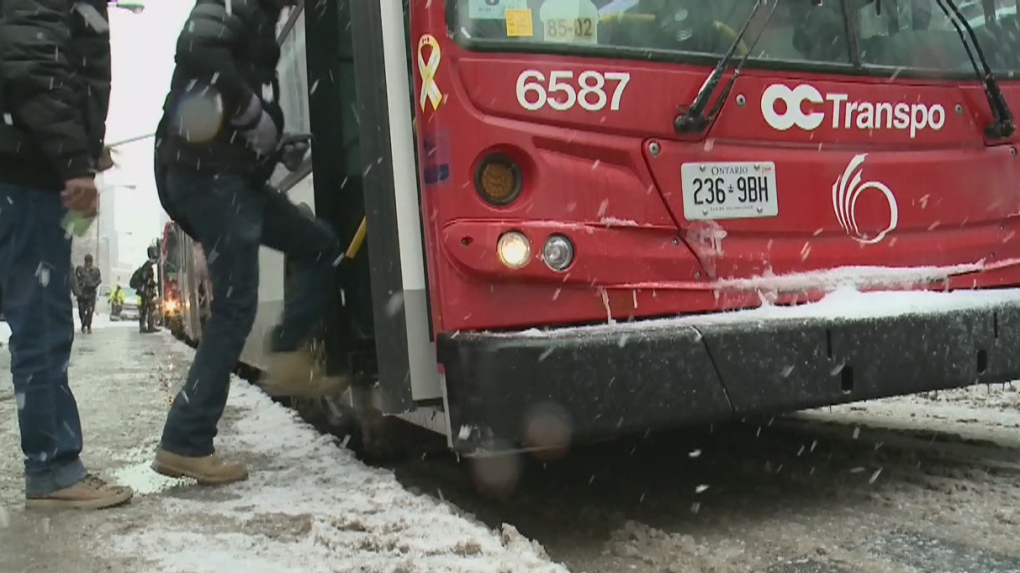 OC Transpo has launched its severe weather plan ahead of the Wednesday-Thursday winter storm.

OTTAWA -- Ottawa's public transit system is getting ready for the winter storm.

Up to 40 cm of snow was initially forecast to fall Wednesday into Thursday. Late Wednesday evening Environment Canada changed the forecast to include freezing rain and possibly rain overnight, with 15 to 25 cm of snow accumulation by late Thursday.

In a memo, Transportation General Manager John Manconi said OC Transpo has initiated its "Severe Weather Plan" in anticipation of the storm.

Manconi says service delays will be communicated through channels such as OC Transpo's Twitter accounts (@OC_Transpo and @OCTranspoLive), the OC Transpo iPhone app, subscription-based alerts, and on transit screens at stations.

Manconi says RTM has provided OC Transpo with a "detailed plan outlining their preparations" for the storm.

The message came just moments before a major delay on the LRT, after a power component came loose near St. Laurent Station Wednesday afternoon. It's unclear if the weather played a role.

One of the changes made on the Confederation Line is an adjustment to braking procedures, called "type 2 braking", which results in trains braking and accelerating more gradually at stations.

"Type 2 braking is an operational tool within the computer-based train control system that can be applied during winter weather events," Director of Transit Operations Troy Charter said in an email to Newstalk 580 CFRA. "A comparison can be made with driving a car during a winter storm, where a driver would adjust their driving habits, and in this particular case their braking, based on weather conditions. We are proactively implementing type 2 braking in advance of the upcoming winter weather event as part of the winter operating plans. Customers may notice that the trains come to a more gradual stop and start,"

Manconi said RTM may continue to operate trains overnight, in conjunction with their snow clearing operations.

"If warranted, we have staff available to run trains overnight," Manconi said.

Manconi says Rideau Transit Maintenance and their contractors will be clearing snow throughout the storm and will be salting stations. Other elements of RTM's winter storm plan include:

Mayor Jim Watson has urged anyone who can stay home Thursday to do so, which may help ease some congestion on the roads as crews seek to clear the snow.

Manconi says customers should plan ahead if they must still use public transit.

"We thank our customers for their patience and encourage all Ottawa residents to plan ahead and give themselves extra time to get to their destinations," he said.