OC Transpo bus destroyed by fire had prior mechanical difficulties

David Gale and his fiancée were following a bus on St. Laurent Blvd. late Friday afternoon.

"We...could smell a very bad burning smell and we could see smoke coming out of the right side of the back of the bus," recalls Gale.

At a red light, Gale got out of his truck and approached the bus driver to let him know about the smoke. The bus pulled over to the side of Coventry Rd. and put on its hazard lights. After spending an hour in the mall, Gale noticed the bus was still there.

It wasn't until Tuesday night, while watching CTV Ottawa, that the couple made the connection.

"My fiancée Nadine mentioned that it was 8010 that we had stopped on Friday," says Gale.

OC Transpo has confirmed to CTV Ottawa that bus 8010 had mechanical problems last week, with smoke originating from the rear.

In an emailed statement OCTranspo says the bus went through thorough testing both on the road and at their maintenance facility.  "Throughout the extensive inspection and testing, the bus operated normally"

OC Transpo says at this point they don't have "anything to suggest that the  Friday incident contributed to the incident this week".

On Tuesday morning, the bus, Route 222, had around 70 to 80 passengers on board. It was travelling east on Piperville Road just before 7 am when the driver noticed the bus was "sluggish."

He pulled it over and went out to inspect the bus while customers remained on board. They then heard a loud bang, what passengers assume was the sound of a tire blowing.

Once they started to smell smoke and burning rubber, the driver told the passengers to evacuate the bus.

"Maybe 30 seconds later walking from the bus and just going around it you could see that one of the back tires was on fire. From there people started to back up a bit more and realized that this was real, and it was catching up pretty quickly actually," says passenger Pierre-Paul Roy, who posted dramatic video of the fire.

Within minutes, the double-decker bus was engulfed in flames. Fire fighters quickly arrived to douse the flames but damage to the bus was extensive.

No one was injured. The passengers were picked up by another bus within half an hour.

OC Transpo Assistant Manager, Troy Charter, says they don't yet know what caused the fire. Investigators will be examining the bus over the next few days to determine the cause.

He says they consider this an isolated incident, and have no reason to suspect a problem with the rest of the double-decker fleet.

But in the statement from OCTranspo Wednesday evening, confirmation of a small fire on board a double-decker bus in 2015.   The bus was safely evacuated.  In that case a Transmission wiring harness making contact with the exhaust of the engine Turbo charger was found to be the root cause.

Last February, the same model of double-decker bus caught fire in Kitchener. The GO transit bus was also mostly destroyed. The cause was found to be an air brake assembly that froze.

The Enviro-500 bus is made by Alexander Dennis. The company wouldn't comment on any connection between the fires.

The same vehicle, bus 8010, was involved in a collision in April of 2013. During bad weather it slid off the shoulder of Woodroffe Avenue and collided with a hydro pole. 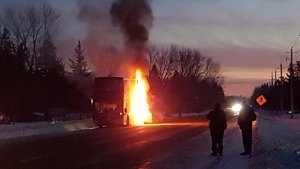