The O.P.P. say they’ve put a major dent in the drug trade in Eastern Ontario.

Members of the Organized Crime Enforcement Bureau, along with members of the Sûreté du Québec, held a news conference today to share details of “Project Adelaide” – an 11-month long undercover operation into an organized crime ring spanning from Montreal to Ottawa and several Eastern Ontario communities.

The investigation resulted in the seizure of 2.5 kilograms of cocaine, one kilogram of marijuana, half a kilogram of hashish, a hand gun, seven vehicles, and 409-thousand dollars in cash. Police also seized a house, and will be seizing a Robinson R44 helicopter.

At the time of the news conference, Bullen, Perron and Penault were still at large. Police say negotiations are underway with two of them for their surrender.

Police say the investigation also uncovered evidence of intimidation, extortion and loan sharking. They are also looking into a $1.2 million mortgage fraud and high level money laundering of approximately $10 million.

They describe the drug operation as using a sophisticated “just in time” delivery method. Cocaine was shipped from Montreal to Mont-Tremblant, QC. where it was rapidly re-packaged and sent to local traffickers in Ottawa and several Eastern Ontario communities. They credit concerned residents in those communities from tipping them off to the operation.

“Project Adelaide sends a clear and strong message that police, working together, will do everything in their power to safeguard communities,” says OPP Deputy Commissioner Scott Tod. 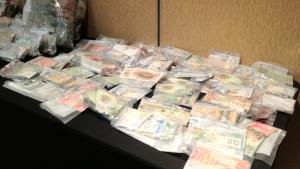 Flip through evidence photos of seized drugs, cash and cars.