Nonetheless, the committee voted 4-1 in favour.

Ace Powell lives right beside the land. He says, “I have some serious decision to make... do I move? I am certainly not happy with this in my backyard.”

The 700 thousand-square-foot warehouse would include space for 1,800 vehicles, 63 loading bays, and 240 trailer drop spaces.

It's not known which company is planning to use North Gower for the new distribution facility.

Leigh-Andrea Brunett says, “It’s the 'Emperor's new clothes' we are being sold an invisible product. They are promising some great package but we have no idea. “

The mystery company plans to hire up to 1,700 workers.

The plans submitted to the city's planning department shows Broccoloni Construction requesting a zoning change to allow for a warehouse use. 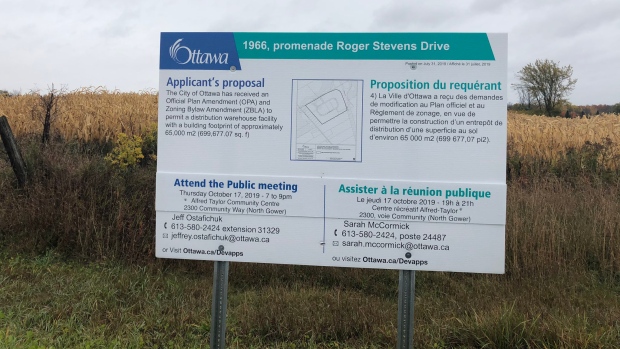 The idea of a massive building plopped down in the middle of a rural village has many residents fuming.

Local resident James Graham has spent hours pouring over documents and mobilizing the community against the plan.

"Although not everyone in the community is opposed to the warehouse because they hope for jobs in the area, approximately 85-95% of residents are against the plan.  2920 signatures in opposition have been collected over 25 days and will be submitted at Queen’s Park by MPP Goldie Ghamari next week. Ironically, the villagers’ representative on Ottawa City Council, Ward Councillor Scott Moffatt is both pro-development and sits on the committee that has the final say on whether or not the project goes ahead.  Representing the City of Ottawa, The Agricultural and Rural Affairs Committee or ARAC sits today to consider the proposal. More than 28 citizens are already registered to speak out against the proposal at today’s meeting, and other community members are attending to register their opposition as well," James told CTV Ottawa in a statement.

The Councillor for the area, Scott Moffat, supported the zoning changes. He says residents’ concerns can be addressed with the developer. “The water, the drainage concerns that can all be addressed at site plan,”

Moffat says this can bring economic development to the village. “We have seen a lot of closures in North Gower in the past 15 years. in fact we just lost our bank a month ago. So bringing more jobs in brings more people to the area.”