‘Everybody is afraid’, residents look for the source of mysterious fish deaths 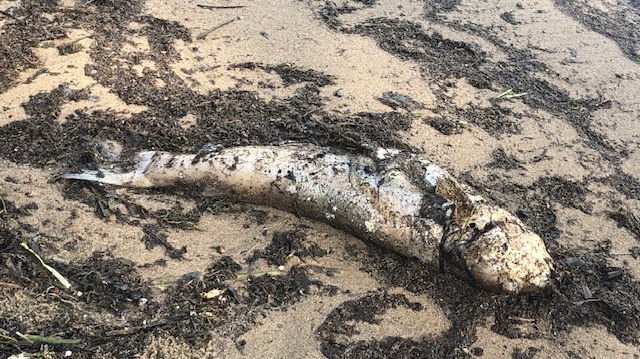 Residents are beginning to narrow down a possible cause of the dead fish in Masson-Angers, after a fourth wave of fish wash ashore.

“Never have I seen something like that,” said Alexandre Thibault who says he was fishing on the Lièvre River the night before the first batch of fish were discovered dead.

“In about 10 minutes, everything here was covered in white, foam everywhere.”

Thibault says it was around 7:45 p.m. on July 8, when he says he saw a white foam blanket the water, and within minutes, fish began surfacing dead.

“I see lots of fish, just pop out of the water, dead,” said Thibault.

“The day after when I come here, I see like a thousand fish everywhere, on the sides of the water, and that’s not normal.”

Thibault says he saw the white foam coming from the valves located under the Brookfield Hydro Plant located on the Lièvre River.

The company that runs the hydro plant, Evolugen, confirms they are cooperating with officials on the investigation in an e-mailed statement:

"Like everyone in the community, we continue to be concerned with the fish mortalities of the last weeks on the Lièvre River. We have been doing inspections of our facilities and land on the Lièvre River and confirm that our operations have been the same as previous years. We do not add anything in the river to produce renewable energy. We continue to collaborate with the government on their investigation."

Residents living on the water say they too, have seen the white foam in large quantities, and each time, dead fish have followed.

Roxanne Briand every morning she wonders what she will find next.

“The first thing we do is get up, we go down those stairs, apprehending how many fish are we going to find this morning,” said Briand.

“Right now everybody is afraid, we’re all afraid,” said Briand.

“It’s just not right, something is going on.”

It’s not yet known what the white foam substance is, or if it is responsible for the deaths of the fish.

It’s the fourth wave of dead fish found in a month. More than 1000 fish were found dead Monday.

It is not an infectious disease, but rather the fish were exposed to something toxic in their environment. However, the cause still remains unknown.

According to Quebec's Ministry of Forests, Wildlife and Parks, a team travelled to the Masson-Angers area and took fresh water samples Samples for analysis were sent to the Quebec Centre for Wildlife Health in Saint-Hyacinthe.

Officials say they have yet to receive the final report from the second wave of dead fish, but also suspect intoxication is responsible.

Residents are frustrated, and want more communication from the city and the province.

“There’s something going on, and we’d like to find out what it is,” said Briand.

“We have to know what happened,” said Thibault.

“And as soon as possible.”