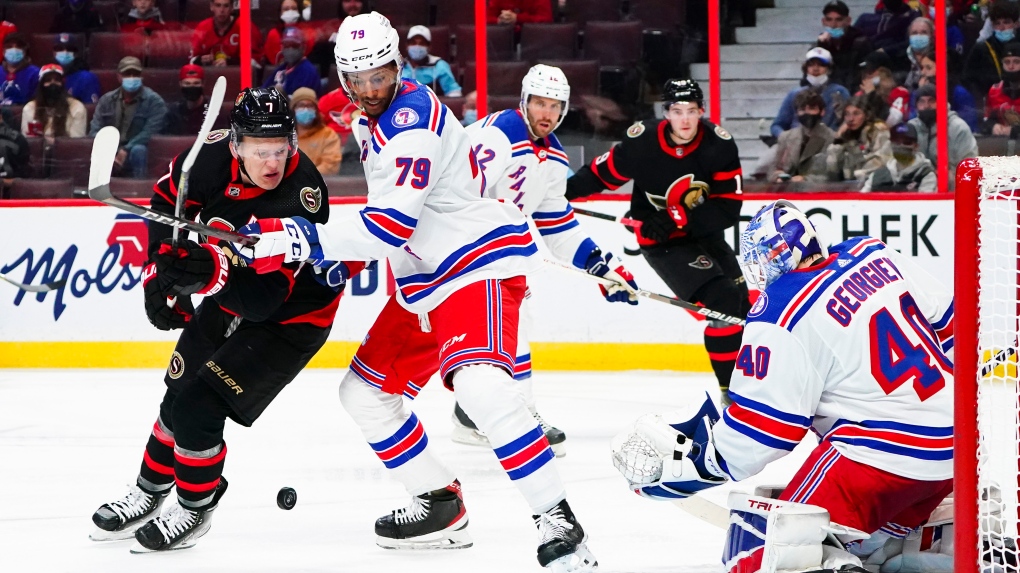 OTTAWA -- For 54 minutes, the Ottawa Senators were in control but a late lapse proved costly in a 3-2 loss to the New York Rangers on Saturday afternoon at Canadian Tire Centre.

Ottawa held a 2-0 lead midway through the third period, but a fight, a penalty call and a tipped goal on the winner helped give the Rangers the comeback victory.

Barclay Goodrow scored the winner with just over two minutes remaining on a deflection of a Sammy Blais shot. That capped a run of three New York goals in a span of three minutes 20 seconds.

"After the second period, we knew we weren't playing the best," said Goodrow. "We knew that we were going to have to string together a good 20 (minutes) to even have a chance to tie it up or come out with the win, so I felt like we really put our work boots on in the third period."

Nick Paul, who scored the opening goal for the Senators (2-3-0), fought with Blais midway through the period, apparently upset that he'd been hit from behind without a call.

That left Senators head coach D.J. Smith without the services of a top defensive forward and forced him to juggle his lines.

"I"ve been trying to play with more emotion this year and the wires got crossed there," said Paul. "I can't do that ΓÇª I've got to be smart with that. I'm a D-zone guy that wins faceoffs and wins my battles and those are the moments that I come to play and what I strive for and where I play my best hockey. I've just got to stay level-headed."

Ottawa's Parker Kelly then took a hooking penalty and the Rangers were able to take advantage as Chris Kreider put New York on the board.

Senators goaltender Matt Murray, who had been solid to that point with 22 saves, was injured on the play as he took a knee to the head and left the game.

Anton Forsberg was forced into action and it didn't take long for the Rangers to capitalize. With Tim Stutzle poised to break out on a two-on-one, he got tangled with Jacob Trouba and was called for embellishment.

The Rangers beat Forsberg on their first shot against the backup goalie as Ryan Lindgren was given a clear lane to tie the game. Goodrow followed with the winner two minutes later.

"I thought we carried the play for 54 minutes and, you know, made some bad plays, and ultimately end up losing a game that you shouldn't lose," said Smith.

With the win, New York wrapped its four-game road trip with a perfect 4-0-0 record. Alexandar Georgiev made 26 saves for the Rangers (4-1-1).

"We're starting to show we have that never-give-up mentality," said Goodrow. "Obviously we would like to put ourselves in a better position heading into the third, but the resiliency that we did show in kind of forgetting about the first two (periods) and starting the third like it was a fresh game, it's pretty good to see.

"Nice to know that we have a lot of character in the room."

Georgiev, making his second start of the season, made an incredible point-blank save on Artem Zub in the final minutes of the second period to keep New York within a goal.

This report by The Canadian Press was first published Oct. 23, 2021.