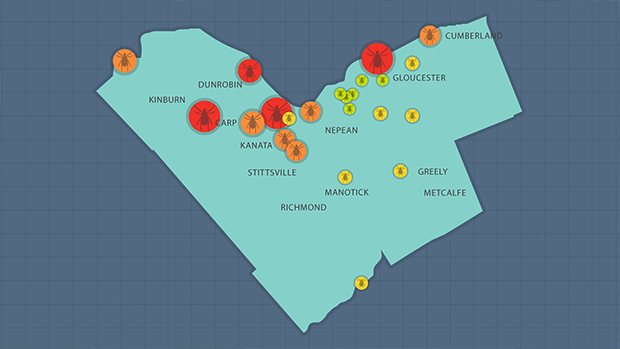 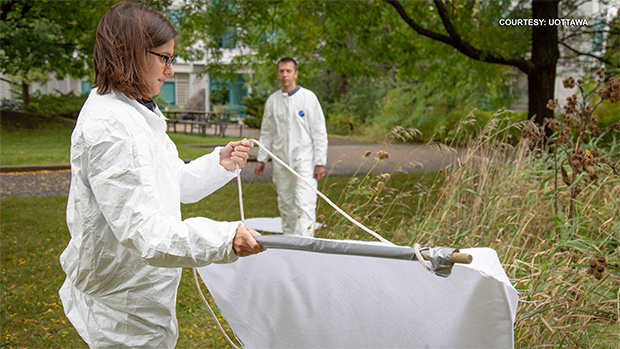 Some startling numbers out today indicate just how prevalent Lyme disease is now in the city of Ottawa.

New data shows that one in three ticks tested was positive for the bacteria that cause Lyme disease.

The study, which was done by University of Ottawa researchers shows that the tick population is far more widespread than previously thought. T

You don't need to tell Ottawa resident Kristy Giles to be careful to stick to the trails when she walks her dog in the woods now.  She knows all too well about the risk of Lyme disease because she has it.

“It took me from being a very active and career-oriented person to being bedridden for a long time,” says Giles, a former triathlon competition.

Giles picked off 7 ticks on her one night while hiking between Kingston and Ottawa a few years ago. New data examining 23 sites across this city show the tick population dramatically rising, along with Lyme disease.

“If we average the infection rates across all the ticks we tested,” says Dr. Manisha Kulkarni, an epidemiologist with the University of Ottawa and one of two researchers conducting the study, “it was just under 30%.”

That's one in three ticks now carrying Lyme disease. The researchers conducted the study, dragging for ticks in our parks and on our trails.

The worst areas were in the woods along the Ottawa River and western Greenbelt.

“It's a good indication for us that ticks are widespread across the city,” says Dr. Kulkarni, “and so  people should be aware when entering a woodland area  along the Greenbelt and the Ottawa River that ticks can be in our environment  and to take precautions to avoid tick bites.”

This is Thanksgiving weekend and a lot of people will be out on trails taking advantage of the beautiful fall weather.  This is also the time of year that the adult ticks are looking for their last blood meal for the season to carry them through the winter.

Lesley Fleming, who advocates for people with Lyme disease through an organization called Voices of Canadians about Lyme disease or VOCAL, says health officials need to step up prevention efforts and their messaging on this.

“Ottawa public health, the city of Ottawa and the National Capital Commission have a responsibility to take the results of the study and relook at the information they have and revamp it.”

Kristy Giles adds the onus is also on us to make sure we are armed with all the information we need to protect ourselves.

“We all want to get outside,” says Giles, “We all want be active and enjoy nature but we all need to be taking this a lot more seriously if we want to do this well.”

The good news, perhaps, is that we're not as bad as the Kingston area where 40% of the ticks carry Lyme disease.  The bad news, according to Dr. Kulkarni is that we're probably headed that way.

Dr. Kulkarni says there are different control measures being examined to contain or reduce the number of ticks.

“We can use measures like barriers along trails to prevent ticks from coming into contact with humans or other control measures to target small mammals with to kill ticks before they encounter humans.”

The researchers are in the second year now of a three-year study measuring the tick population in Ottawa, along with infection rates.  Their most recent data was published today in the Canada Communicable Disease Report.