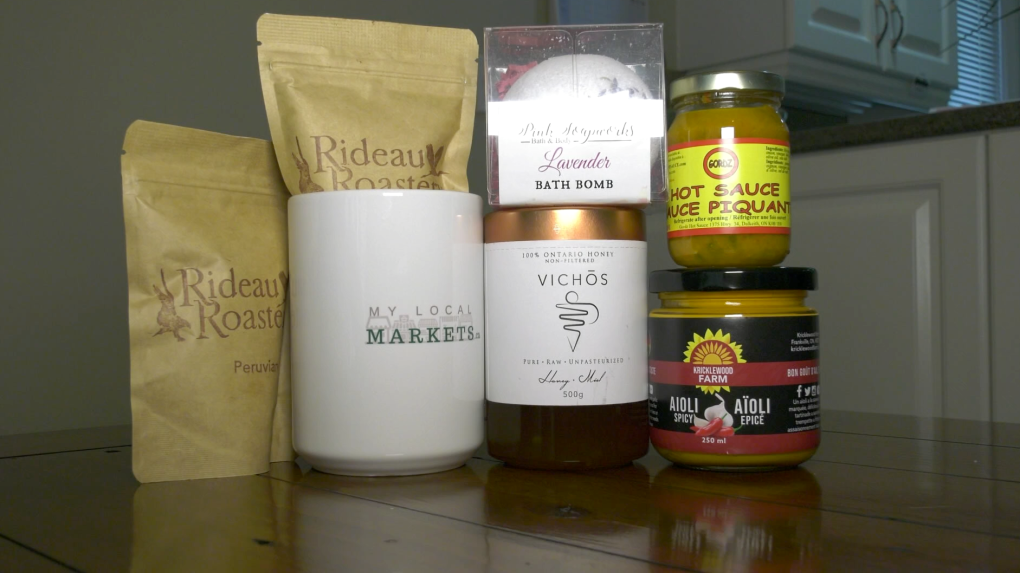 BROCKVILLE -- When the COVID-19 pandemic forced many businesses to close, a new Kemptville start-up took off, by sourcing locally made items from the area and offering them to consumers.

“We thought that this was just going to be a kind of a little passion project to keep us busy during COVID but its really expanded into something much more than that,” said Darlene Collin.

Collin, who lives in Kemptville, had a hard time sourcing local eggs and other products when the COVID-19 pandemic began, and a lightbulb lit up in her head.

“I couldn’t get a hold of them because they were likely in the barn. So I’m like ‘how can you sell your eggs if you’re busy in the barn?’” she said.

“Then I tried to buy honey and I had a difficult time reaching them because they are busy working on their products. I realized it wasn’t particularly easy to support local even though that is something I wanted to do.”

Collin registered a website called mylocalmarkets.ca on April 19 and started to contact local vendors. When the site was ready on April 22, she received her first order.

It is a family affair with her husband, children and father helping to pack, pick up and deliver across North Grenville and surrounding area.

“It’s moved a lot faster than I thought for sure,” said Collin’s father, Andre Lahaie.

“That’s why I’m lending a hand a little bit, because I have a bit of business in me to help and secure some locations for her but she’s doing a great job right now. People want to order from us before they order from Loblaws,” he said.

It is a lot more than just food items being offered.

Shelly Spruit owns Against the Grains Farm in Winchester with her husband and have farmed for 32 years. Recently they transitioned into producing heritage and ancient grains for specialty crops.

“She (Collin) reached out by way of email and said ‘hey I’m putting together this online platform and are you interested in participating?’ and I said lets do it!”

Spruit was selling her products across the province, but her business took a hit as restaurants she supplied began to close during the pandemic.

She has noticed that people now want to know more about the food they are consuming.

“They’re starting to take much more of an interest in knowing their farmer, where their food is coming from and I think that it gives us an opportunity as farmers to showcase what we are capable and what we are doing in the area.” Spruit added.

The business has grown so fast that Collin is about to move into a warehouse on the old Kemptville College campus and she’s also secured spaces in Nepean and Brockville.

“We originally thought we were going to be predominantly North Grenville but the demand was so big that we now cover Prescott, Brockville, 401 corridor out to Mallorytown, Smiths Falls and Ottawa, all they way up to Hunt Club Road.” Collin said.

“We already secured a location in Nepean to be able to do distribution from there. There are some vendors from that area that are specific to that region. So we’ll have an option that you can buy regionally,” she added.

The response has been overwhelming.

“Everybody has been ecstatic. The vendors have been appreciative. My main goal is to introduce their products to more people and hopefully help customers find gems that they didn’t know was there before,” Collin said.

“When we drop stuff off to peoples houses its actually really fun. They are really excited to see what’s in the bag and they are really thankful that we are there,” she added.

“This is the perfect showcase of a woman who said this is a need and this is an opportunity,” said Spruit.

“She rolled up her sleeves and reached out to different people to see who was willing and who wanted to participate and got it done. Within a few weeks we were all up and running..” Spruit added.

“Once people start to taste what a difference that locally grown is and that its fresh.....There’s no other conversation to be had.”

Active COVID-19 cases in Ottawa down on Monday