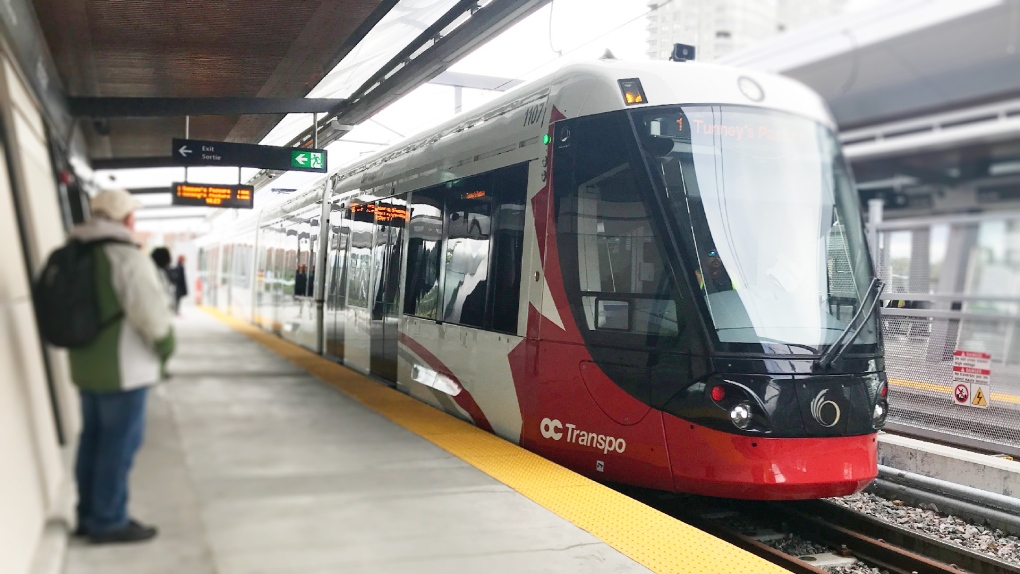 A train approaches the platform at Hurdman Station along the Confederation Line of Ottawa's LRT system. (CTV News Ottawa)

The new Ottawa city council is dealing with an old problem as it meets for the first time since being sworn in.

Monday’s meeting was largely in-camera, meaning it wasn’t open to the public. It focused on legal issues stemming from the city’s ongoing court battle with Rideau Transit Group and Rideau Transit Maintenance (RTG and RTM), the consortium of companies that built and now maintains the Confederation Line LRT.

"There is no doubt that as we start this new term of council that we face many challenges," Mayor Mark Sutcliffe said Monday. "Today, we are going to be focused on one of those challenges, the Stage 1 light rail legal update and litigation overlay related to the Ottawa Light Rail Public Inquiry. This will allow us to begin our important work of digging into the details of providing the important role of oversight on Ottawa’s light rail system."

In recently filed court documents, the city submits new evidence towards its claim that RTG is in default of its responsibilities under its 30-year, $1-billion contract with the city.

The new evidence includes events that happened in the summer of 2022, well after the two derailments that caused major shutdowns on the line and ultimately led to a public inquiry, results of which are to be released Wednesday.

The city cited three main issues: a power failure during Bluesfest, an axle-bearing failure that was detected by an operator, which the city argues could have led to a third derailment, and a lightning strike that kept nearly a kilometre of the track shut down for several days.

Meanwhile, the company that built the trains that run on the line says the issues it is seeing haven't occurred anywhere else in the world.

RTG has maintained that the system has been running well since the derailments in August and September 2021, but the city’s new submissions suggest there remain critical issues that have yet to be addressed. The city has also noted that the root cause analysis into the axle failure that caused the derailment in August 2021 still isn’t complete and RTG hasn’t made any progress on early detection measures to spot possible future issues.

ISSUES IN OTTAWA NOT SEEN ANYWHERE ELSE: ALSTOM

The company that manufactured the trains that run on the Confederation Line says the issues it has seen in Ottawa are unique.

Included in court documents was Alstom's preliminary analysis of the root cause of the axle bearing failure that led to the derailment in August 2021, in which the company says the design of the track is causing issues it hasn’t seen anywhere else. 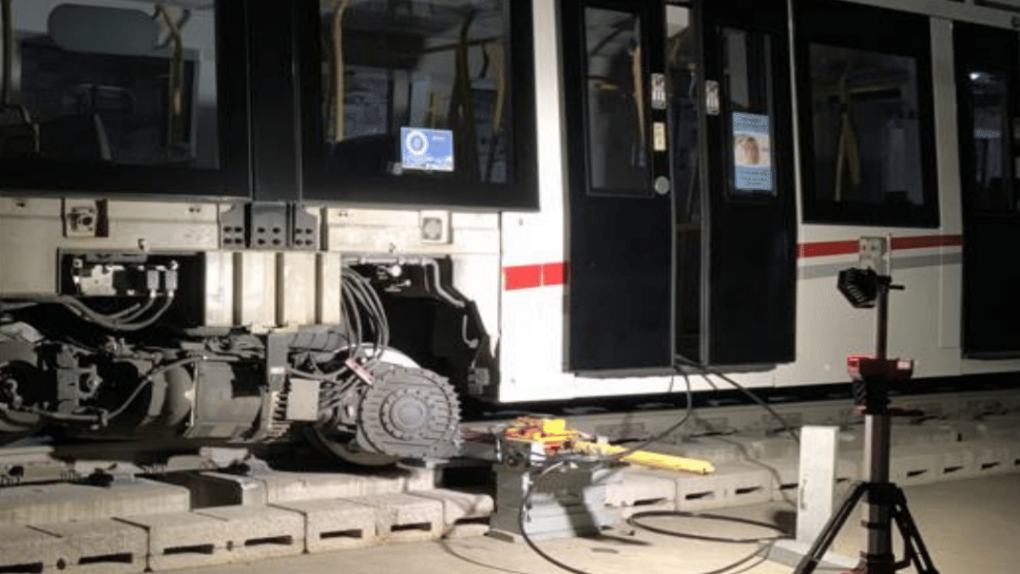 An LRT train derailed near Tunney's Pasture station on Aug. 8. after a fault within the axle bearing assembly. (Photo courtesy: City of Ottawa)

“The root-cause analysis demonstrates that the actual design of the track generates excessive transversal loads/forces that causes excessive fretting under the bearing of the axle. This fretting could lead to contact wear, that will generate axial clearance within the bearing assembly,” Alstom wrote. “The axial clearance is occurring on the Ottawa fleet at an accelerated and unprecedented rate with severe consequences not experienced on any other Alstom product operating with the same concept elsewhere in the world.”

The issue lies within the curves on the track, such as the one seen between Lees and Hurdman stations. Alstom suggested short-term solutions such as increased track greasing, adjustment of speed along curves and, in the long-term, additional track work to address defects and enhancement of the axle design.

A power outage on a Saturday night during Bluesfest shut down service between Tunney’s Pasture and Lyon stations, just as concertgoers were heading home. In a letter dated Aug. 18, 2022, included in the court documents, Rail Operations Director Troy Charter told RTG CEO Nicholas Truchon that the root cause appeared to be related to a control cable, which he said suggests further inspections of similar conditions at other locations is required.

“In summary, a simple station power outage has raised a multitude of issues where it appears that the System has not been maintained properly or perhaps not designed and constructed properly,” Charter wrote.

OC Transpo pulled all O-Train vehicles that have travelled more than 175,000 kilometres out of service for additional inspections after a failure was discovered in one of the wheel hub assemblies on a train on July 21.

A train operator reported vibrations and an inspection found a failure in one of the wheel hub assemblies.

In his letter, Charter says the operator prevented another serious issue, suggesting another derailment could have occurred.

“The quick action by the Operator clearly prevented another serious incident from occurring but this is the second occurrence of a major axle failure on an in-service train. As you know, a very similar, if not identical, issue occurred in August 2021 which led to the derailment of LRV 19, one year ago,” Charter wrote.

Charter also said the mitigations in place to keep the system running are becoming cumbersome.

About 900 metres of track was taken offline after a lightning strike on July 24, which damaged part of the overhead power system. It took about five days to get the line fully open again.

Charter says that while a lightning strike is out of RTG’s control, he is requesting a full review of lightning mitigations. 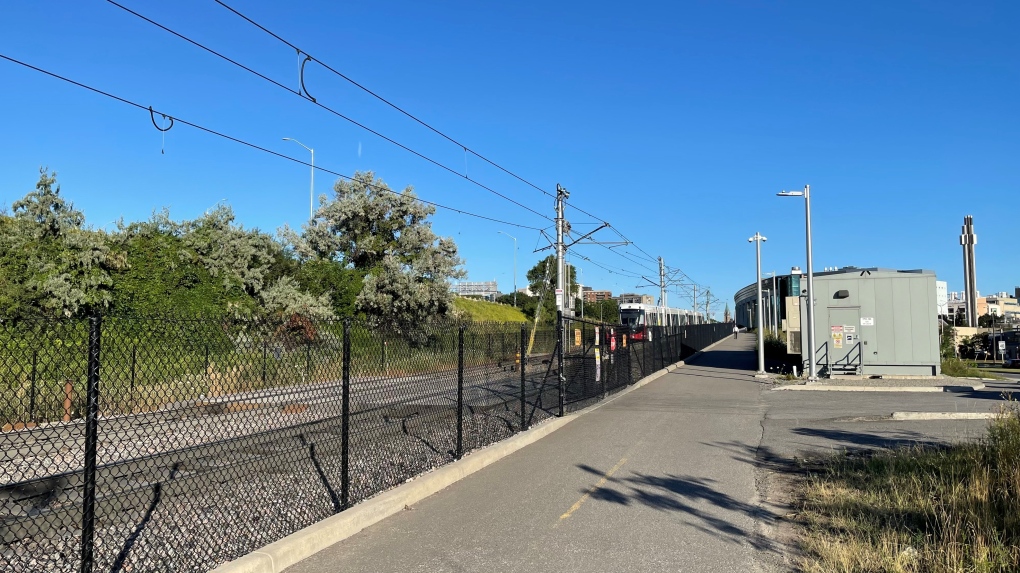 An immobilized train sits on the O-Train track between uOttawa and Lees stations on Tuesday, after a lightning strike damaged the LRT infrastructure. (Josh Pringle/CTV News Ottawa)

In a statement, RTG said it continues to work with the city on all issues that have arisen on the Confederation Line.

A full report from Justice William Hourigan following last summer’s public inquiry into Stage 1 is set to be released at 11 a.m. Wednesday. Sutcliffe has promised to implement the recommendations from the public inquiry. As part of his 100 days in office pledge, Sutcliffe said he would "begin to implement the key recommendations" to fix the system.