OTTAWA -- It's not uncommon to see coyotes in the city of Ottawa.

However, a pair of coyotes spotted in a residential area on multiple occasions has one woman concerned for her safety and on high alert.

"A couple of nights ago. I saw them chasing a rabbit and a squirrel," says Nepean resident Jacqueline Bolton.

Bolton’s security cameras captured what appears to be two coyotes hunting down their prey, right in front of her house.

This isn’t the first time she’s seen the coyotes staking out her Nepean neighbourhood.

"Just the other night I saw one come up the drive and walk right over to the deck," says Bolton. "And that was when I thought, something has to be done.”

Bolton says she doesn’t feel safe knowing these animals are roaming the streets where she walks her small dogs.

"I have three little dogs and that concerns me. The smallest is about four pounds," she says. "If they come up to you, do they bite? Do they whatever? I’m a little bit frightened about that."

Here’s what the Ministry of Natural Resources and Forestry says to do if you encounter an aggressive coyote: 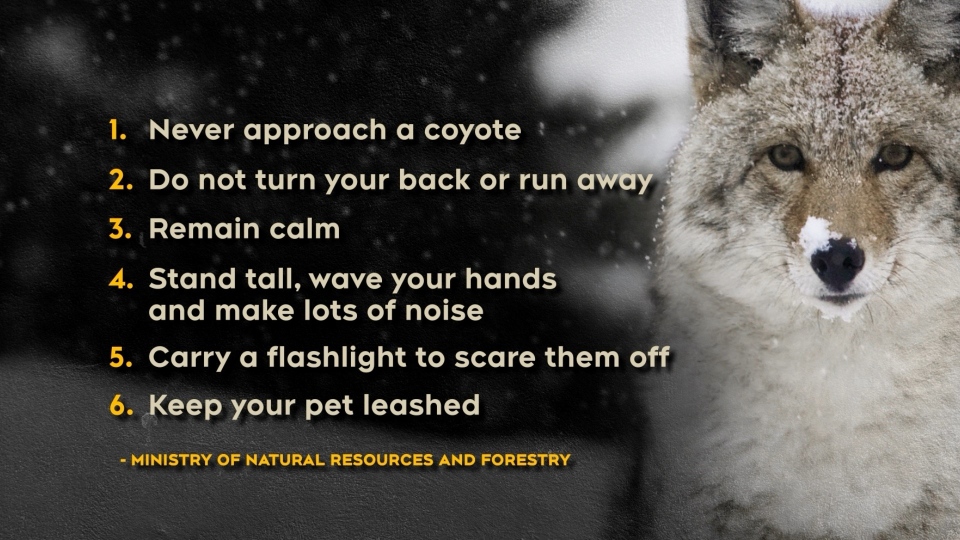 Bolton says she wants the coyotes removed from the area before it's too late.

"I’m hoping that we can look after this issue so that nobody is hurt, you know, attacked. And animals are safe, as well as us," says Bolton.

If you see a wild animal in your area you can contact the NCC or the city of Ottawa at 311 to report it.