The Ottawa and Gatineau region is one of the best locations in the country to see the fall colours. The National Capital Commission is now running weekend shuttles to Gatineau Park to help with crowd control during Fall Rhapsody.

Cooler weather, along with bright colours everywhere you look in the Gatineau forest. A scene that attracts thousands of visitors including Patti and Jim Leclair from Belfast, Maine.

"We lucked out," Patti says. "We totally lucked out."

And one of the best spots for leaf watching, Champlain Lookout.

"For us in Maine it’s more mountainous," says Jim. “So you don’t actually get the scenic views. Here we can see for miles and miles.”

"Every year, it becomes magnificent again," says Orleans resident Don Collar. "So you never get tired of the creation. And we marvel at it."

Many travel to Gatineau Park for the NCC’S Fall Rhapsody. For the next few weekends, the best way to get to the park is with their free shuttle bus.

"It goes and makes a number of stops throughout the park," says Allison Eagen, NCC Manager Public Programs and Communications. "It’s a hop on, hop off system. So people can just board, get off at the stop of their choice, get back on, go to another stop if they wish. And it runs every 15 to 20 minutes."

Some seeing this colourful view for the first time.

"I think we got it just around the peak time, so it’s really, really nice," says Lee Wah-Shee Anawak. "You can see all the colours popping really nicely. And we couldn’t have picked a better day."

"I love most the escape from the city," says Firth. "Because when you’re there it’s like this concrete world. And being able to step out of it an hour away is really nice."

Despite the crowds, the Fall Rhapsody in an annual tradition for many locals.

"Gorgeous as usual," says Jo-Ann Ferguson. "We always come up here this time of year. Beautiful." 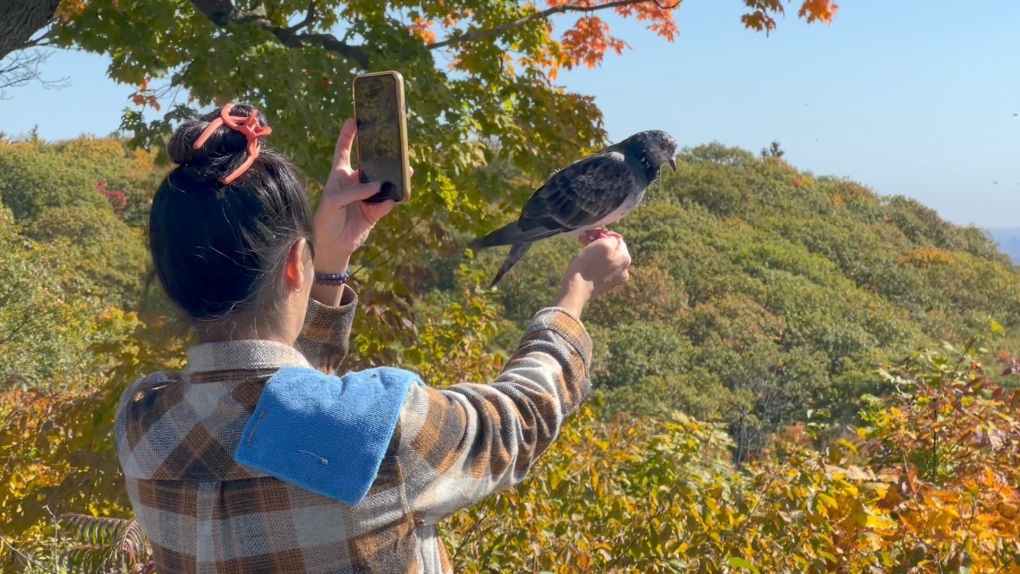 This view, even spectacular for local Instagram star PJ Pigeon.

"We go everywhere with her," says bird owner Julie Vung. "They’re amazing pets, they’re just like dogs. She just never wanted to go with the wild and ended up coming home every night."

For Patti and Jim Leclair, they say this most likely won't be the last time they visit the Fall Rhapsody.

"We love to explore," says Patti. "We just find everything we can find and usually it’s by accident. This was a big accident that was amazing."

The head of Ukraine's state-run nuclear energy firm said on Sunday there were signs that Russian forces might be preparing to leave the vast Zaporizhzhia nuclear power plant which they seized in March soon after their invasion.

With a cost estimate of $4.38 billion, remediation of the Giant Mine, one of the most contaminated sites in Canada, is also expected to be the most expensive federal environmental cleanup in the country's history.

Protesters angered by strict anti-virus measures called for China's powerful leader to resign, an unprecedented rebuke as authorities in at least eight cities struggled to suppress demonstrations Sunday that represent a rare direct challenge to the ruling Communist Party.

CTVNews.ca has five main takeaways from Canada’s 4-1 loss to Croatia.

A peer reviewed study assessing over 800 elderly women has found that flavonoids -- a naturally occurring substance found in beverages such as black and green tea -- could lead to notable health benefits.

Edmonton transit drivers are sharing images of what they are seeing on buses and the LRT on a sometimes daily basis in the hopes it will push the city to hire more transit peace officers.

The federal government has unveiled its long-awaited Indo-Pacific Strategy, which details a decade of plans for investment and partnerships in the region, and signals a tougher stance on China going forward.

Federal Health Minister Jean-Yves Duclos says the previously announced one million units of imported kids' pain relievers are starting to arrive on pharmacy shelves, while an additional 500,000 units have been ordered and are expected over the next few weeks.