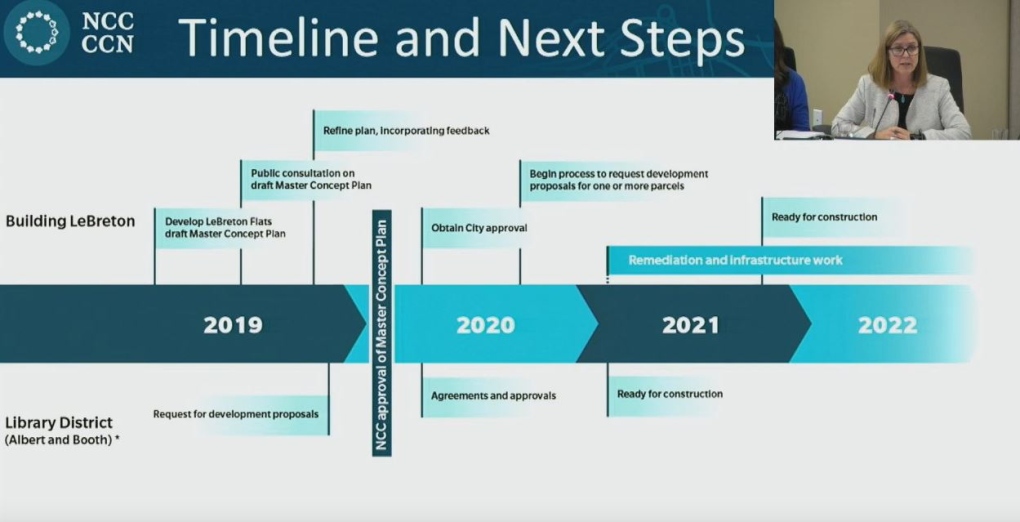 NCC Board of Directors LeBreton presentation

The National Capital Commission board of directors met on Thursday, discussing several topics, including and especially the next steps for the LeBreton Flats redevelopment.

NCC CEO Tobi Nussbaum says more than 400 people came out on Tuesday for a public consultation on the building project, one of several such consultations being put forth to the public by July 2, 2019. Online consultations are being held until then as well, found here.

NCC Director of Real Estate Transactions and Development Katie Paris gave a presentation on the LeBreton Flats project, explaining its six guiding principles. She says, chief among them are enhancing the capital experience, as LeBreton is a special region for both capital residents and those across the country. Also highly important is the creation of a viable community, as the LeBreton Flats area is an extension of downtown. She says LeBreton will need places to live, work, and play, and for visitors to enjoy. The NCC is looking at diverse housing opportunities for the area. Access to current and future transit networks also played a key role in the discussions. The remaining guiding principles included valuing nature, building excellence through innovation, and honouring the past, especially the First Nations history of the land.

Paris stressed the importance of early public consultations, saying the input received from Tuesday's session will be put into a report that will be shared with the public. She says overall, responders were enthusiastic, but impatient to see work start. The main takeaways from the in-person session were the focus on the idea of building a community in LeBreton Flats with schools, housing, and businesses, and making enjoyable for people to live and work there. The public also wanted to see connections to Indigenous cultures and history on the site.

As the public consultations end by July 2, the NCC says it'll conduct roundtables to connect with as many groups as possible to connect on other topics, including arts and culture, affordable housing, First Nations input, environment, and education. Paris says they're looking to hire an urban planner to help with the master concept plan by mid-July. They then hope to "dive right into planning," and move forward to craft a draft master plan that they say they hope to present to the NCC board and the public by November of this year.

Following the draft master plan's presentation, they will then come back to the board for approval by January 2020. Paris says they'll then work within the City's approval process, and seek approval by summer 2020. They'll then go to the private sector with building phases by the end of 2020, till early 2021. Simultaneously, they'll be working on the new public library, with its proposals and evaluations ready in mid-2020, and construction ready by mid-2021.