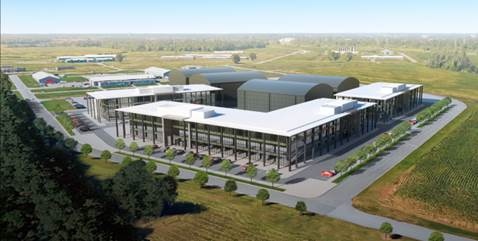 The proposed soundstage that will be built in the Greenbelt.

The National Capital Commission has given the green light to a meaty investment for Ottawa's creative sector.

The commission approved a new creative hub and film soundscape that will be built in the Greenbelt at their latest board meeting on Thursday.

The creative hub, first proposed by Toronto's TriBro Studios and the Ottawa Film Office, is supposed to create an additional 500 jobs in Ottawa's TV, film and animation industries.

City officials also project that the hub will inject $40 million into the local economy in the first few years of its existence.

Ottawa Mayor Jim Watson said he was pleased with the announcement.

The campus will be decked out with high-tech film equipment, including four stages, an integrated backlot and up to 200,000 square feet of office spaces.

The new hub will be built on the land that was once home to the Greenbelt Research Farm. No experiments have been run on the site since the land was acquired by the NCC in 2000 and many of the buildings are vacant.

The project has long been supported by city council, but needed the NCC's stamp of approval before they could proceed.

To mitigate the effects of the creative hub on the Greenbelt, the NCC also said they will also be re-developing the Capital Golf Course. Officials at the NCC did confirm there would be no ecological losses by creating the cultural hub in the Greenbelt.

The need for a cultural hub has been at the forefront of conversations between city council and the NCC since 2012.