Murder victim's family has no idea why Sharif Said was murdered

Ottawa Police continue the hunt tonight for a killer in connection with the city's third murder of the year. 21-year-old Sharif Said was gunned down early Sunday morning on Tremblay Road near the Ottawa Train Station.  Today, Said's family spoke of the young man's accomplishments to counter suggestions the young man was involved in drugs or gangs. Instead, they painted a picture of a student on a path to a brighter life. Inside an east-end townhouse, a grieving family mourns the loss of a young life full of promise, they say.    Proudly displaying his certificates, his acceptance into Carleton and uOttawa, his uncle discounted suggestions that Said had anything to do with a gang.  Abdul Hassan would only agree to an audio interview.

‘That's what the family is adamant about dispelling, that he was a member of a gang,’ says Hassan, ‘as if he's responsible for his own killing.  It’s not a suicide. The question should be for the murderer when he is found; what his background is and how did he grow up and what made him become a murderer because our son never murdered anyone.’

Ottawa Police say they are investigating all leads in the murder and would not confirm whether drugs or gangs played a role.

‘I can't speak to that,’ says Staff-Sergeant Rob Drummond with Ottawa Police Major Crime, ‘that is part of our ongoing criminal investigation and ultimately we hope to be successful in going ahead with a prosecution so I can't talk about those things at this time.’

St-Sgt Drummond did confirm that Said was known to Ottawa Police, though. According to court documents filed at the Ottawa courthouse, Said was convicted in June of 2013 with assault and break and enter charges. He breached his sentence and ended up spending 9 months in jail.  In March of 2014, he was convicted of obstructing justice and fined.

Police have determined a truck with Alberta license plates had no involvement in the murder; just coincidence the two scenes were so close to each other. Said's grey car, with both doors wide open and a sneaker in the middle of the road suggests a surprise attack.  His family has no idea why he was targeted but had this message for his killer.

‘We hold no bitterness towards him,’ said Abdul Hassan, ‘it’s just as the same way as a victim; these kids need to be awakened that lives do matter, all lives.’

At this point, police have no suspects in the murder.  But they are counting on surveillance footage from the area -- and hoping more witnesses will come forward 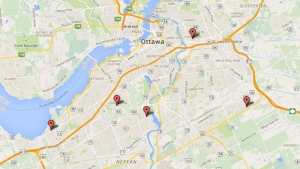