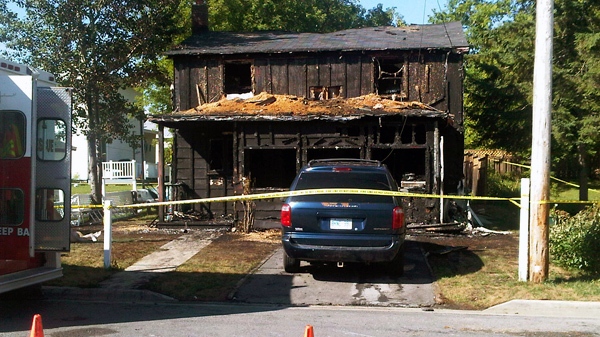 A mother and two of her children were killed when a fire ripped through their home on Boundary Road in Alexandria, Ont., Friday, Aug. 12, 2011. Two others were seriously injured.

A mother and two of her children were killed early Friday morning when their house went up in flames in Alexandria, about an hour east of Ottawa. The children's father and the couple's middle child barely managed to escape and are fighting for their lives in hospital.

The parents have been identified as Sarah Cholette and Martin Desjardins, both in their 20s.

Cholette was killed in the blaze along with her three-year-old daughter, Chloe, and son, Jacob, who police say is nine months old. Desjardins and the couple's 19-month-old son, Maxime, were seriously injured.

The fire is believed to have started at the front of the house, cutting off the family's only escape route. It's unclear if there were working smoke alarms in the home.

Cholette and two of her children became trapped early Friday morning when fire quickly ripped through their house.

Neighbours called 911 at about 2:30 a.m. The home was completely engulfed in flames by the time firefighters arrived.

"We could hear some cries for help and when we looked outside the fire was kind of burning out of control," recalled neighbour Brian Sliepenbeck.

Neighbour Marie-Andree Laferriere, 18, told CTV Ottawa she watched firefighters battle the flames to get to the three family members trapped inside.

"They took out two infants. And one of them was being resuscitated over there. And the mother, which died within five minutes, they put a white tarp over her face," Laferriere said.

Cholette and two of her children were pronounced dead at the scene. Desjardins was transported to Toronto's burn centre in serious condition, so badly burned his family isn't allowed to see him.

His only surviving child, Maxime, is in critical condition at the Children's Hospital of Eastern Ontario.

The children's great grandmother told reporters the situation is just too much to handle.

"With children involved, it's really, really hard. I love my granddaughter Sarah. I love her very much . . . but it's the grandchildren. I really don't know," said Jean-Louis.

Neighbours say the family was pleasant and moved into the neighbourhood a couple of years ago. Their kids were often seen playing in the front yard.

Witnesses say the fire started at the front of the house and quickly spread upwards to the chimney. The house is a total loss.

With a report from CTV Ottawa's John Hua